'Girl died on the kitchen table' 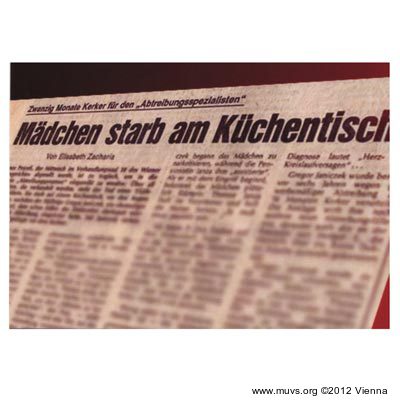 ‘Girl died on the kitchen table’ – this headline from the Austrian daily ‘Kurier’ of 8 March, 1973 referring to a failed abortion is typical for the period before the liberalisation of abortion in Austria on 1 January, 1975.

Until then abortions took place within the own family or they were performed by so called ‘angel makers’: Without any medical training and in constant fear of imprisonment. The kitchen usually was the only place then equipped with both, rather adequate light and hot water. As instrument went whatever was at hand, for the existence of appropriate devices in the household would be revealing in case of a house search. Whereas knitting or crocheting needles, bicycle spokes etc. wouldn’t arouse suspicion. Yet, they are too rigid and not adjusted to the anatomic conditions. As a result, various major injuries and consequent lifelong effects or even fatalities had been caused.

Under the circumstances, the ‘angel makers’ tried, out of pity or commercial concerns, their best to ensure their clients survive. Nevertheless, the State, the Church and the media had them often depicted as criminal, vicious and morally inferior.