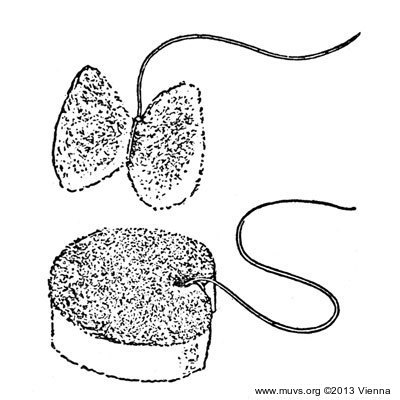 In addition to coitus interruptus, methods employed in the vagina were frequently used to prevent pregnancy.

Papyri from ancient Egypt describe mixtures and preparations that women applied to their vaginas before having sex.

In the distant past, small sponges were soaked in a variety of spermicidal substances. The vaginal sponge, which is still available, provides evidence that these methods can be effective to a certain degree.

It is said that Casanova discovered the contraceptive effectiveness of lemons in the 18th century: the juice was squeezed from half a lemon, which was then placed over the uterine opening like a cap.

Descriptions of a number of barrier methods in current use can be found at http://www.cervicalbarriers.org/information/images.cfm

Blue Femcap Example of a new and improved cervical cap. It is …

Cavity-Rim Cervical Cap Cardboard packaging with a diaphragm and instructions for use. The …

Caya The Caya Diaphragm is anatomically and ergonomically contoured and thus …

Cervical cap White plastic pot with cervical cap and instructions for use. …

Cervical cap An old model of a cervical cap, which would be …

Chinese femidom Two femidoms packaged in plastic, with instructions for use.

Contracap cervical cap Yellow diaphragm, presumably a prototype. The diaphragm is set on …

Contra E Suppository for use as contraception, without foaming. Contents: one packaged …

Contragel green To be used with diaphragms or cervical caps

Femcap pink L Example of a new and improved cervical cap. It is …

KaWe cap pessary Cap pessary made from celluloid, size 5; in its original, …

KaWe caps Pessary made from celluloid

lady Two vaginal suppositories, in plastic, in a white box with …

Lemon Half In the 18th century, Casanova was said to have discovered …

Ortho-Gynol Contraceptive (used in combination with a diaphragm). White-blue cardboard with …

Ortho Vaginal Applicator Used in combination with the Ortho cream for diaphragms.  Object …

Parma, size 75 Mensinga pessary in a light-blue, round, plastic tin. The pessary …

Patentex spray-foam Foam can, complete with applicator and description, are in the …

Protectaid Sponges Sponges to be inserted into the vagina. White packaging with …

Reality. Female Condom Based on the function of condoms and intended to provide …

Transparent Check Pessary Transparent amber-coloured pessary with a white string. Packaged in a …

Vindex Thimble-shaped metal part, which has a small (intended) dent on …