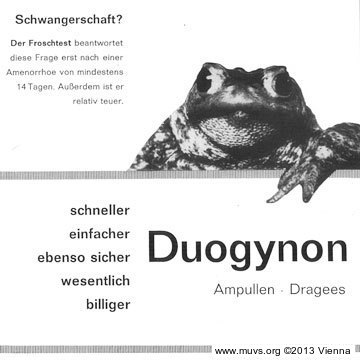 “The signs of pregnancy can be so ambiguous or difficult to interpret that women are often thought to be pregnant when they’re not – and yet in other cases, a pregnancy isn’t recognised until very late. Midwives and women themselves are not the only ones who can get it wrong – until the 18th century doctors had very little clue about the physical signs either.”

Based on Jacques Gélis: Birth – Folklore, rituals and practices from 1500 to 1900

Pregnant or not pregnant – that all-important question. Nowadays we can find out the answer in no time: a urine test from the chemist’s can tell you in just a few minutes, even shortly before your period is due. It is chemistry that makes this possible.

Until the 1970s, the gold standard was the frog test. The accuracy of frogs as biological indicators was comparable with that of the tests used today, but it took considerably longer and was more labour-intensive. The basis for the biological test was the similarity between the pregnancy hormone hcG and luteinizing hormone (LH), which is used by the brain to regulate ovulation or sperm production. In pregnant women, high levels of hCG are present in the urine. In animals, this has the same effect as over-stimulation with the sex hormone LH, and produces the same (described) reactions.

The first immunological tests for the pregnancy hormone hCG using biochemical methods were introduced in 1960; however, they were still not very accurate. Women had to wait until two weeks after a missed period before hCG levels would be high enough for the test result to be reliable.

It wasn’t until 1975 that there was a decisive breakthrough for quick and reliable early confirmation of pregnancy, in the form of monoclonal antibodies. Only then did it become possible to tell the difference reliably between the pregnancy hormone hcG and luteinizing hormone (LH), and only then was it finally possible to have early confirmation of pregnancy without using live animals.

Baby plus Instant Pregnancy Test. Easy, reliable, on the spot. Within three …

BB news plus Contraceptive case. Urine test pen in an outer box. Plus …

Duogynon In the 1960s and early 1970s, women who suspected they …
Duo Sterone Duo Sterone was used as a pregnancy test. Eight pills …

GraviQUICK by Biomar Mauve box with white overprint. Instructions for use can be …

Nurse 'Nurse' is the brand of a Chinese pregnancy test. The …