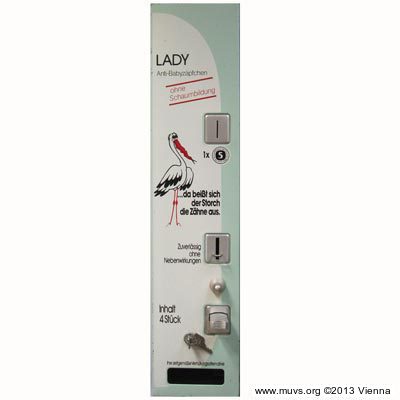 In addition to the familiar condom dispensers, there were and still are machines with vaginal suppositories, such as the Lady brand. Its active ingredient is nonoxynol, which attacks the surface membrane of sperm cells and immobilizes them. The suppository must be inserted into the vagina at least ten minutes before intercourse so that it can be dissolved by body heat and to ensure even distribution of the active ingredient. This product, which is still available for purchase, is intended to be used together with a condom or diaphragm. The same active ingredient can be found in a number of creams, jellies and foams.

While our dispenser does not have a precise date, the price indicates that it was in use before 2002: four suppositories could be purchased for five German marks.

The witty slogan for the ‘contemporary contraceptive initiative’ is certainly original: “this will get the stork’s beak in a twist”, literally “the stork will break its teeth on this”. It accompanied a depiction of a stork with the two halves of its beak coiled like a corkscrew.

Send as E-Mail
save as PDF
Back to: Vaginal Barriers