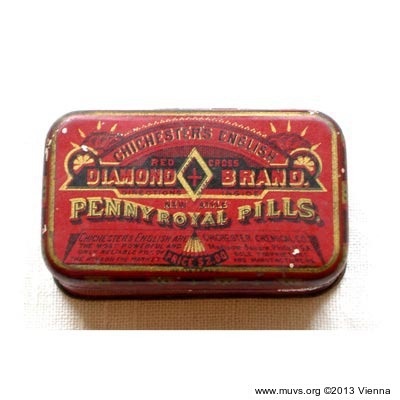 A practical guide for users of Chichester’s English Pennyroyal Pills, produced in Philadelphia, PA. Contains a guide to etiquette for young ladies and calendars for the years 1902 to 1905. Another useful feature are several pages of waxed paper for storing and easily removing stamps.

Pennyroyal has always been associated with women’s bodies and sexuality: it was used in love potions, served as an obscene metaphor for female pubic hair, and was employed as a symbol of illicit sexuality.

It has also been known since antiquity as a powerful abortifacient. When prepared to be consumed as a drink, this plant was employed to promote menstruation and expulsion of the placenta and foetus. It has also been used to ease abdominal pain.

More information (in German) can be found under: http://www.muvs.org/abbruch/pflanzen/object.php?id=1387

In Cyprus and the Atlas Mountains, pennyroyal is still used in traditional medicine.

In English-language medical books in particular, pennyroyal was praised as a royal medicine and called ‘pulegium regium’. ‘Pulioll-royall’, the name used by herbalists, later became pennyroyal. Tablets containing this herb were well known and widely available in English-speaking countries until the mid 20th century. As abortion was illegal, codes such as ‘female trouble’ were employed when it was sold.