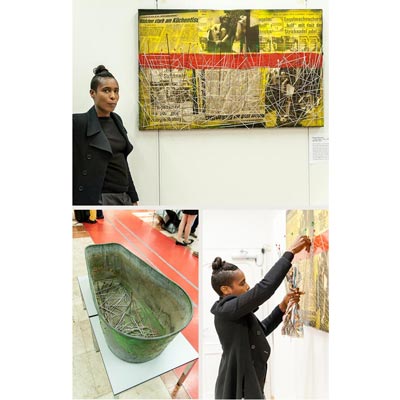 For the artist Pauline Marcelle the knitting needle is not just a tool for (female) handicraft. It also stands for women’s suffering and death in times/countries where women did not or still do not have access to safe and legal abortion.

The chain-link fence, bristling with knitting needles, symbolizes sanctions and barriers that still exist preventing women from the freedom to make their own decisions in reproductive matters. One of the countries lacking thisnfreedom is Austria. Today: Abortion is still prohibited by law, although neither the woman nor the doctor will face a penalty if it is performed in the first third of the pregnancy.

The background collage makes use of a still from Claude Chabrol’s 1988 film Story of Women, starring Isabelle Huppert as the abortionist Marie Latour. This is combined with newspaper articles about incidents involving illegal abortionists from the 1970s.

An art installation with knitting needles by Pauline Marcelle for the MUVS podium discussion: 40 years of abortion during the first third of pregnancy, even though it is still listed in the Austrian penal code.