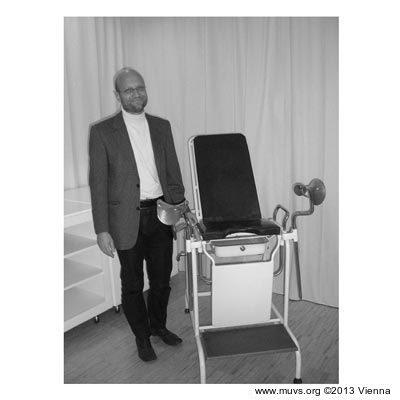 Around sixty years old and already a ‘classic’ in professional circles on account of its functionality and stability is the 70kg Sims-style gynaecological examination chair. The model was developed by the ‘father of American gynaecology’ James Marian Sims (1813-1883) in order to enable examination of women’s genitalia.

Until the mid 19th century, women were examined fully clothed: the woman would stand while the gynaecologist kneeled in front of her. At that time, 99.8% of gynaecologists were men .

It was sold by the Hamburg-based company Krauth.

The rationale for its inclusion in our collection is that after the Second World War, Lübeck was one of the first cities to receive refugees from the former German areas in the East. Many of the women had been raped or for other reasons were not able to continue with their pregnancy. Consequently, a great many abortions were carried out, including on this chair.

Photo: The Director of the Museum for Contraception and Abortion, Christian Fiala, with the donated chair.