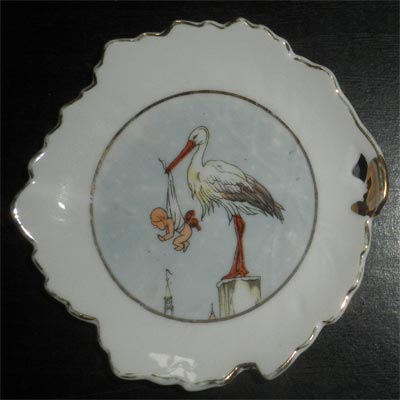 The story that white storks deliver babies and bite the mother’s leg, explaining her confinement after childbirth, became widespread during the 19th century when sexuality was repressed in prudish bourgeois European society (Michael Simon, folklorist, University of Mainz, Germany).

Before that time, water was in many cultures a symbol for the unconscious and the place where unborn souls dwell. And storks prefer wet environments, predestining the bird to become a symbol of fertility. Furthermore, the stork has long been popular among Europeans: this fowl’s annual return to the continent indicates the end of winter.

The most familiar tale about the stork’s role in bringing babies was written by Danish author Hans Christian Andersen (1805-1875), “The Storks” (the Danish original was first published in 1838). They know “the pond in which all the little children lie, waiting till the storks come to take them to their parents. The prettiest little babies lie there dreaming more sweetly than they will ever dream in the time to come. All parents are glad to have a little child, and children are so pleased with a little brother or sister.”

Another story was told by the German surgeon and professor Richard von Volkmann (1830-1889), who wrote “The White Stork Fairy Tale” (1871) under the pseudonym Richard Leander: “Three days before a stork delivers a baby it knocks with its red beak on the window of the house where it will leave the child and calls out: ‘Make ready a cradle, / A net for the flies, / A little coloured skirt, / A white jacket, / A diaper, a cap: / The stork is coming.’ ”

The theme of babies being brought by storks appears in a number of different depictions and variations. Our plates were purchased at a flea market in Warsaw, Poland. That country has the largest stork population in the world, almost 100,000: “Every fourth stork is Polish!”

Plate 1: The sky-blue centre field contains a stork holding in its beak a diaper with a baby. The bird stands on a chimney, and a church tower and part of a roof can also be seen. The picture is separated from the white edge by a golden line. A hole in the plate’s right edge could have been used to mount it.

Plate 2: The centre field, in yellow and beige, contains a stork with a baby sitting on its back. The bird approaches a gate, apparently intending to deliver the baby. The urban setting is illuminated by a street lantern. A religious figure (the Madonna?) is visible on the wall of a building. The picture is separated from the white edge by a golden line. A hole in the plate’s right edge could have been used to mount it.