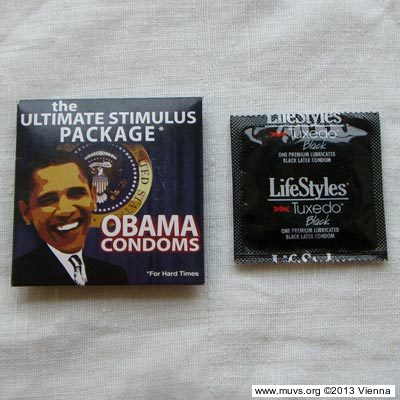 ‘Available everywhere’, ‘inexpensive’ and ‘fast’ are properties that make condoms and their packaging ideal adverts that address the target audience directly. Furthermore, they suggest protection and consideration. In a US election campaign no less, condoms were employed by a number of candidates, including Barack Obama and Sarah Palin.

Other condoms in our collection communicate the European idea (Euroglider condoms made of natural rubber, sold in a blue box with yellow stars) or national patriotism (with Switzerland’s flag, a white cross on a red background).

In 2004, the Zimbabwean underground organisation Zvakwana handed out packages of condoms quoting the refrain of Bob Marley’s popular song ‘Get Up, Stand Up’. This was part of its campaign to encourage the citizenry to engage in democratic resistance.

One of the boxes shows Barack Obama in front of the White House and is printed with the slogan ‘Hope is not a form of protection’. The other depicts him with the presidential seal in the background and the slogan ‘The ultimate stimulus package’. Both were sold in the USA.[13.12.10 17:04:39] susanne krejsa: The Consequences of Illegal Abortions with Knitting Needles (Left Inside)Three-dimensional model (moulage)

Material: metal, glass, plastic, plaster, wax
This three-dimensional model shows a uterus wall that has been perforated by a knitting needle. The results are heavy bleeding and inflammation of the abdominal cavity.
When abortions are illegal, instruments that do not raise suspicion, such as knitting needles, are used.
The uterus is almost always tilted forwards or backwards. Inserting a rigid instrument straight into the abdominal cavity can easily puncture its wall. In the past, this often caused heavy bleeding and/or serious inflammation, and a large number of women either died or experienced serious complications.
Today, with abortions performed legally, perforation is extremely rare. However, surgery and treatment with antibiotics will prevent permanent injury should it occur.