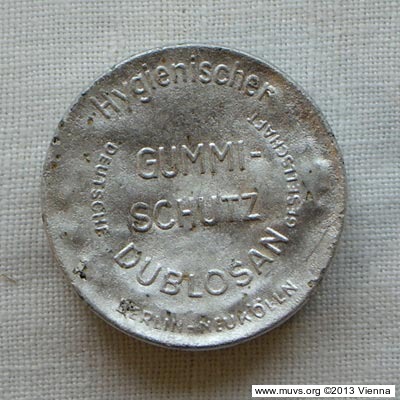 Contraception during the Second World War.

By around 1930 already, there existed an ideal form of contraception, so popular that later, during the Second World War, it became a mandatory feature of every ship’s on-board pharmacy: Dublosan! Dublosan, registered as a trademark already in 1924, fulfilled two needs at once: firstly, it protected against sexually transmitted diseases such as syphilis, and secondly, it served as contraception.

One could get Dublosan both as an ointment in a tube, to be rubbed into one’s private parts, and as a condom placed loosely in the tin, without being sealed in. Dublosan was sold in these silver aluminium tins until the end of the 60s. After that, plastic pots were used. Dublosan’s success came to a sudden end when in 1982, the Federal Health Agency banned distribution of the product due to traces of mercury. Despite this, the company still has great success in the sales and distribution of natural rubber latex condoms, even today.