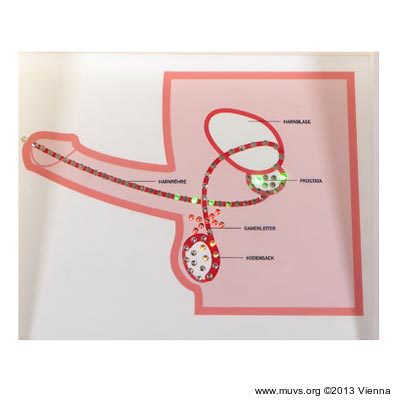 The diagram shows the ejaculation process before and after a vasectomy: the erection is unaffected, while the sperm remain in the sperm duct and testes and are reabsorbed. The amount of ejaculate is nearly unchanged, as sperm represents solely two to three percent of the total. There are no after-effects of a vasectomy noticeable by sex partners.

The acceptance of vasectomies as a birth-control method varies significantly around the world: already widespread in northern Europe and English-speaking countries, it is still being promoted in Asia. For example, on the king’s birthday and other holidays Thailand celebrates vasectomy festivals where men can be sterilised at no charge. An animated diagram was developed to explain the process, and MUVS’ exhibit is based on it.

Send as E-Mail
save as PDF
Back to: Body Models