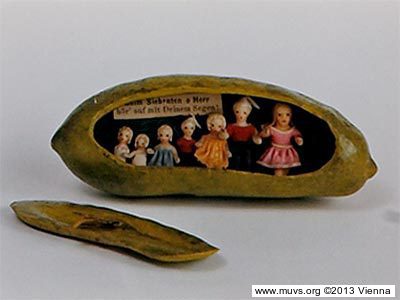 Where do babies come from? They are gifts from the Lord. The choice of contraceptive methods has always been influenced by the suspected or known cause of pregnancy. In retrospect, we might smile about obviously unsuitable ones, as we know better now.

A great many efforts, some of them desperate, were made to limit the number of children a woman bore. This wax cucumber was a popular wedding gift intended to secure divine help with this problem: ‘Dear Lord, stop your blessings after number seven!’

Later, women took these wax objects to church as votive gifts. This custom was practiced into the 19th century.

This specimen was produced by a Salzburg candlemaker.