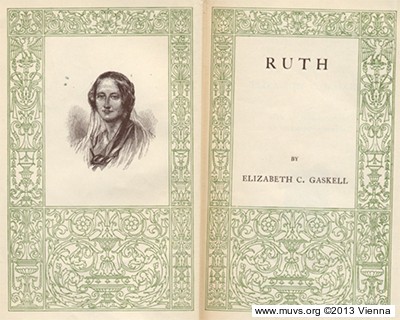 "Why, Thurstan, there is something so shocking the matter, that I connot tell you."

"I beg your pardon; but something so shocking has just been dicovered - I don't know how to word it  - She will have a child. The doctor says so."

"These are quite new ideas to me," said Miss Benson, coldly. "I think, you, Thurstan, are the first person I ever heard rejoicing over the birth of an illegitimate child. It appears to me, I must own, rather questionable morality."

"I do not rejoice. I have been all this afternoon mourning over the sin which has blighted this young creature; I have been dreading lest, as she recovered consciousness, there should be a return of her despair..."

"But, Thurstan, everything might have been done to 'lead her right' (as you call it), without this child, this miserable offspring of sin."

"The world has, indeed, made such children miserable, innocent as they are; but I doubt if this be according to the will of God, unless it be His punishment for the parents' guilt; and even then the world's way of treatment is too apt to harden the mother's natural love into something like hatred. Shame, and the terror of friends' displeasure, turn her mad - defile her holiest instincts; and, as for the fathers - God forgive them! I cannot - at least, not just now."

"Whether the children are legitimate or illegitimate?" asked Miss Benson, drily.

"Yes!" said her brother, firmly. "The more I think, the more I believe I am right. No one," said he, blushing faintly as he spoke, "can have a greater recoil from profligacy than I have. You yourself have not greater sorrow over this young creature's sin than I have: the difference is this, you confuse the consequences with the sin."

"The poor child!" said she, at length - "the poor, poor child! what it will have to struggle through and endure! Do you remember Thomas Wilkins, and the way he threw the registry of his birth and baptism back in your face? Why, he would not have the sitution; he went to sea and was drowned, rather than present the record of his shame."

"I do remember it all. It has often haunted me. She must strengthen her child to look to God, rather than to man's opinion. It will be the discipline, the penance, she has incurred. She must teach it to be (humanly speaking) self-dependent."

...."after all, it might be concealed. The very child need nrver know its illegitimacy."

"If I'd been with you, Master Thurstan, I'd ha' seen sharp after you, for you're always picking up some one or another as nobody else would touch with a pair of tongs. Why, there was that Nelly Brandon's child as was left at our door, if I hadn't gone to th' overseer we should have had that Irish tramp's babby saddled on us for life; but I went off and told th' overseer, and th' mother was caught."

"Yes!" said Mr. Benson, sadly, "and I often lie awake and wonder what is the fate of that poor little thing, forced back on the mother who tried to get quit of it..."

"I suppose most depraved women have been innocent in their time," said Mr. Bradshaw, with bitter contempt.

"Oh, Mr. Bradshaw! Ruth was not depraved, and you know it. You cannot have seen her - have known her daily, all these years, without acknowledging that!" Mr. Benson was almost breathless, awaiting Mr. Bradshaw's answer. The quiet self-control which he had maintained so long, was gone now.

"I saw her daily - I did not know her. If I had known her, I should have known she was fallen and depraved, and consequently not fit to come into my house, nor to associate with my pure children."

"Now I wish God would give me power to speak out convincingly what I believe to be His truth, that not every woman who has fallen is depraved; that many - how many the Great Judgment Day will reveal to those who have shaken off the poor, sore, penitent hearts on earth - many, many crave and hunger after a chance for virtue - the help which no man gives to them - help - that gentle tender help which Jesus gave once to Mary Magdalen." Mr. Benson was almost choked by his own feelings.

"I know that money is but a poor compensation, - is no remedy for this event, or for my youthful folly."

Mr. Benson set his teeth hard together, to keep in words little short of a curse.

"Indeed, I offered her money to almost any amount before; - do me justice, sir," catching the gleam of indignation on Mr. Benson's face: "I offered to marry her, and provide for the boy as if he had been legitimate..."

Mr. Benson did not speak. He could not, till he had gathered some peace from looking at the ineffable repose of the Dead.

"Men may call such actions as yours, youthful follies! There is another name for them with God..."