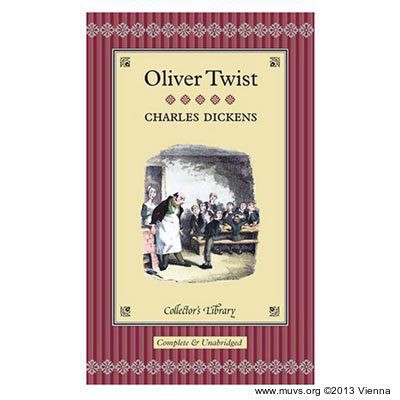 The hungry and destitute situation of the infant orphan was duly reported by the workhouse authorities to the parish authorities.
---
Upon this, the parish authorities magnanimously and humanely resolved, that Oliver should be "framed", or, in other words, that he should be despatched to a branch workhouse some three miles off, where twenty or thirty other juvenile offenders against the poor-laws rolled about the floor all day, wihtout the inconvenience of too much food or too much clothing, under the parental superintendence of an elderly female, who received the culprits at and for the consideration of sevenpence-halfpenny per small head per week.
---
...at the very moment when a child had contrived to exist upon the smallest possible food, it did perversely happen in eight and a half cases out of ten, either that it sickened from want and cold, or fell into the fire from neglect, or got half smothered by accident; in any one of which cases the miserable little being was usually summoned into another world, and there gathered to the fathers it had never known in this.