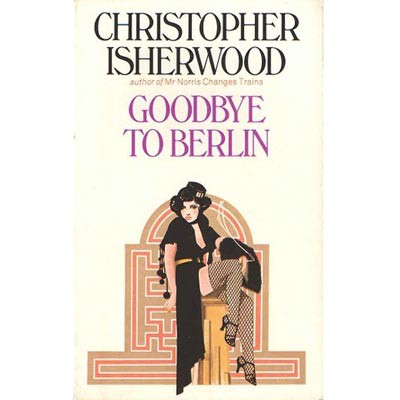 Frl. Schoeder [sic!] really quite likes Frl. Kost and certainly hasn’t any moral objections to her trade: nevertheless, when she is angry because Fr. Kost has broken the spout of the teapot or omitted to make crosses for her telephonecalls on the slate in the living-room, the invariably she exclaims:
‘But after all, what else can you expect from a woman of that sort, a common prostitute! Why, Herr Issyvoo, do you know what she used to be? A servant girl! And then she got to be on intimate terms with her employer and one fine day, of course, she found herself in certain circumstances… And when that little difficulty was removed, she had to go trot-trot…’

The doctor, when he arrived, stayed a long time. Frl. Schroeder and I sat waiting in the living-room to hear his diagnosis. But, very much to our surprise, he left the flat suddenly, in a great hurry, without even looking in to wish us good afternoon. I went at once to Sally’s room. Sally was sitting up in bed, with a rather fixed grin on her face:
‘Well Christopher darling, I’ve been made an April Fool of.’
‘What do you mean?’
Sally tried to laugh:
‘He says I’m going to have a baby.’
‘Oh my God!’
‘Don’t look so scared, darling! I’ve been more or less expecting it, you know.’
‘It’s Klaus’, I suppose?’
‘Yes.’
‘And what are you going to do about it?’
‘Not have it, of course.’ Sally reached for a cigarette. I sat stupidly staring at my shoes.
‘Will the doctor…’
‘No, he won’t. I asked him straight out. He was terribly shocked. I said, “My dear man, what do you imagine would happen to the unfortunate child if it was born? Do I look as if I’d make a good mother?”’
‘And what did he say to that?’
‘He seemed to think it was quite beside the point. The only thing which matters to him is his professional reputation.’
‘Well then, we’ve got to find someone without a professional reputation, that’s all.’
‘I should think’, said Sally, ‘we’d better ask Frl. Schroeder.’
So Frl. Schroeder was consulted. She took it very well: she was alarmed but extremely practical. Yes, she knew of somebody. A friend of a friend’s friend had once had difficulties. And the doctor was a fully qualified man, very clever indeed. The only trouble was, he might be very expensive.

I didn’t like the doctor. He kept stroking and pinching Sally’s arm and pawing her hand. However, he seemed the right man for the job. Sally was to go into his private nursing home as soon as there was a vacancy for her. Everything was perfectly official and above-board. In a few polished sentences the dapper little doctor dispelled the least whiff of sinister illegality. Sally’s state of health, he explained, made it quite impossible for her to undergo the risks of childbirth: there would be a certificate to that effect. Needless to say, the certificate would cost a lot of money. So would the nursing-home and so would the operation itself. The doctor wanted two hundred and fifty marks down before he would make any arrangements at all. In the end, we beat him down to two hundred. Sally wanted the extra fifty, she explained to me later, to get some new nightdresses.