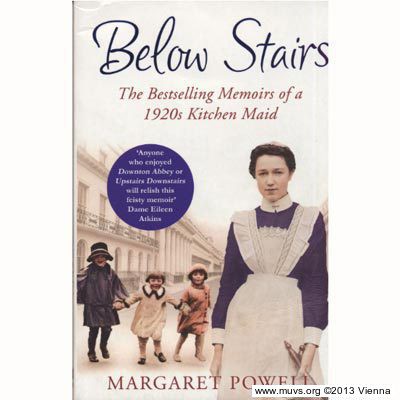 It was shortly after I had agreed to stay on with Mrs. Cutler that something happend which still stands out in my mind like a scene from a Victorian meldodrama. It was discoverd that Agnes, the under-parlourmaid, was going to have a baby.

Nowadays it's all so vastly different; so much do they want you now in domestic service that I'm sure that if your employers found you were going to have a baby they'd say, 'Yes, well bad luck. But you'll be sure and come back when you've had it, won't you?' You see them advertising, saying one child not objected to. They're as good as saying all right, you've got an illegitimate baby, we're quite prepared to accept the child as well.

In those days it was slam the door, dismissal with no money, your own home probably closed to you, nothing left but the streets or the workhouse.

Gladys and I shared a bedroom with Agnes and although I'd seen her being sick as soon as she got out of bed, I didn't realize that it was one of the symptoms of having a baby. I just thought she had sudden bilious attacks. It did seem strange that as soon as she got on her feet it happened, and that she was all right during the day, but that's what I put it down to.

Eventually Gladys, who was far more versed in all these things than I was, asked her outright if she was pregnant. It sounded a terrible word that 'pregnant'. Agnes admitted that she was and implored us to keep it a secret.

She (Gladys) bought bottles of pennyroyal pills which were supposed to be very good at getting rid of it, Beecham's pills, and quinine. But all they did for Agnes was to make her spend half the day in the lavatory. Then on Gladys' instructions we used to lug hot water up the stairs to fill the hip bath for her. Then we'd tip tins of mustard in it, until it was absolutely yellow. That was supposed to be another good thing, hot mustard baths. Maybe it would have been if Agnes could have got her waist in it, but she couldn't. Then she tried carrying all the heavy weights she could, and when it was her day off she used to go in the park, climb on to the park benches and then keep jumping off. It sounds amusing, but it was a terrible thing for her. She tried shifting furniture. She would pick up a massive armchair, they were huge in those days, and move it from one part of the room to the other. But none of it did any good.