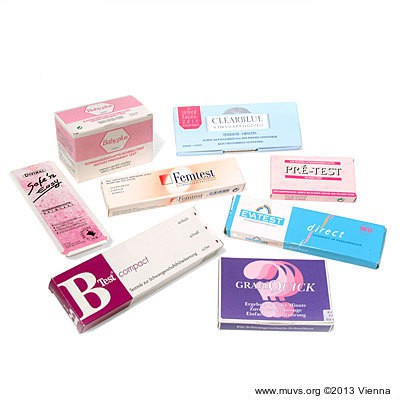 Home pregnancy tests are now the most commonly used method of testing for pregnancy. They are relatively simple to use and the result can be seen after just a few minutes.

The first home tests came on to the market in the 1970s and were still very unreliable. Not until 1980, with tests patented by the British company Unipath Ltd , could women expect 95% reliability.

The rapid immunochromatic assay is now available in pharmacies. Some pregnancy tests contain a small plastic beaker for urine collection, others have a test strip that can be held directly in the stream of urine. The bonded antigen-antibody-dye travels to the test and control zones and colours these as appropriate, establishing the presence of the hCG hormone.

Human Chorionic Gonadotropin (hCG) is a glycoprotein hormone excreted by the placenta during pregnancy and is responsible for maintaining the pregnancy. By the fifth day after conception a special form of hCG begins to prepare for implantation of the blastocyst. HCG also stimulates the corpora lutea in the ovary to release the hormone progesterone, which signals to the body that it doesn’t need to ovulate again for a while.

In order to make absolutely certain, women should see a doctor anyway, because urine tests can be supplemented by blood and ultrasound tests.

You can see a variety of pregnancy tests by following the link to Contraception/Pregnancy Testing: https://muvs.org/en/contraception/pregnancy-tests/