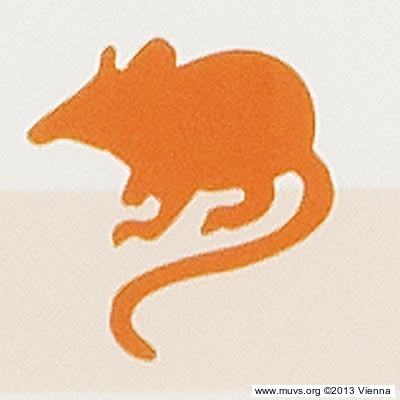 Biological pregnancy tests work by establishing the presence of the ‘follicular maturation’ and ‘luteinizing’ hormones that are produced during pregnancy, by the anterior pituitary glands in the brain and by the placenta. One way of detecting them is by looking at how (laboratory) animals react to the woman’s urine. Studies of this began in the 1920s.

The Ascheim-Zondek test is based on the ‘prolan’ reaction in mice: a sample of the woman’s urine is injected into five immature mice. Each mouse is given an injection of urine twice a day for three consecutive days in different parts of its body; the fourth day is a ‘rest’ day. Exactly 100 hours after the first injection was administered, the animals are painlessly put to death before being fixed to a cork board. Their abdomens are cut open and the ovaries removed. The changes observed confirm whether the woman is or is not pregnant: mature egg cells, corpora lutea, so called blood spots, an enlarged uterus and cell changes in the vagina (‘Schollenstadium’) are clear signs that the woman’s urine contains pregnancy hormones, indicating that she is pregnant.

This technique is 98 per cent reliable when performed correctly. However, although the test was an important stepping stone in the development of modern pregnancy tests, the long waiting time and burdensome test procedure make it unsuitable for use in clinical practice.

Sleeping pills or pain medication could give a false result.