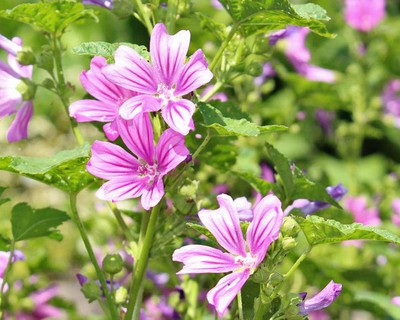 “A nutritious, crispy sliver, 10 millimetres across, round, and easy to grip by its rough surface – how tantalising does that sound to your ears, dear mallow weevil?”

“Unfortunately, those fruits are a bit too big for me,” replies the beetle, “The likes of us don’t eatthe common mallow, but rather use it as a breeding plant.”

“Breeding plant,” I repeat back. “Well, our interests are not so very different then after all,” I say to the weevil, and pick a few leaves of the common mallow for my dinner. I don’t want to sniff them, quickly hold them under the jet of water – maybe a woman has spent a penny on them to test her fertility. It is not for nothing that it is also called the “piss flower” in some languages. If, after three days, nothing has withered, you can count yourself blessed with the ability to bear children, so the wise women used to say.

The things one could learn from the mouths of wise women! And if the “blessing” of children was no blessing at all, and a (further) child was just simply not viable, then, again, this plant can be of service. It grows in every garden, with a pointed, firm tap root, deeply anchored in the ground. You just have to pull it out, wash it well, find yourself a quiet corner, lift your skirt, straddle your legs... For forty-year-old Johanna, it ended badly. She got a high fever, chills, blood poisoning; luckily, she was saved in the hospital. Then: a sentence of 3 months of strict incarceration, made harsher by one day of fasting and one night sleeping on hard boards a month, suspended for a period of 3 years’ probation. [1] She only had herself to blame – in 1955, abortion was illegal in Austria. The state needs workers, taxpayers, soldiers. The Catholic Church needs worshippers.

The plant is called the cheese flower (Malva sylvestris) and is said to have a soothing effect on all kinds of inflammation. That’s actually true though.