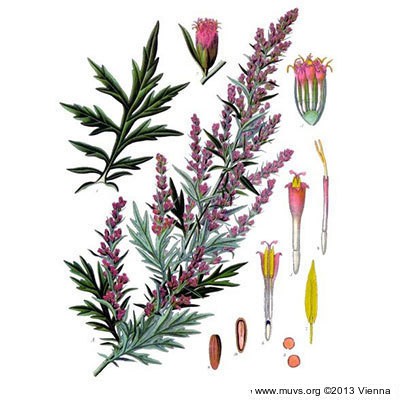 This plant, in the past termed the ‘mother of herbs’, was associated with the Greek goddess Artemis (called Diana by the ancient Romans) and also Isis, then later with the Virgin Mary.

Its common name is believed to derive from the word ‘mug’ because it was used to flavour drinks. Mugwort belongs to the Asteraceae, or Composite, family.

Mugwort is an herbaceous perennial plant and can grow from 30 cm to over 2 m. The leaves, 5 to 10 cm in length, are dark green on top and have dense white hairs on the underside. The flowers are greyish white to yellowish or reddish brown and are arranged in panicles. This plant exudes an aromatic and pungent scent when it flowers, from August to September.

Grows on sunny, warm, nutrient-rich and slightly moist soil. Considered a weed by some.

Throughout Europe and western and northern Asia.

In folk medicine, mugwort was used primarily for menstrual pain. High doses may cause abortion. It also relieves cramps and causes vascular constriction.

This plant is mentioned in a number in Greek and Roman texts from about the first century CE, both as a flavouring and for medicinal purposes. For example, the Greek physician Dioscurides used mugwort to treat intestinal worms. One of his contemporaries, Pliny the Elder, claimed that travellers would not become weary if they wound the plant around their legs. This belief is reflected in its German name, Beifuß, which contains the word for foot or leg.

Mugwort is mentioned in ancient Chinese texts dating back to approximately 500 CE.

Artemisia vulgaris (mugwort) was held in high esteem by the Anglo-Saxons and the Celtic Druids. It was one of the nine herbs that were believed to ward off evil and poisons. Called the ‘mother of herbs’, mugwort was associated with magic and fertility rituals. (Deni Bown, DuMont’s Große Kräuterenzyklopädie [‘DuMont’s Grand Encyclopaedia of Herbs’], Cologne, 1998: 243).

At the birth of the modern age, the female body was regarded as a kind of factory whose purpose was to serve the good of society. This was one reason why all herbs that affect menstruation, pregnancy, birth and nursing were branded witch’s herbs, mugwort being one of them.