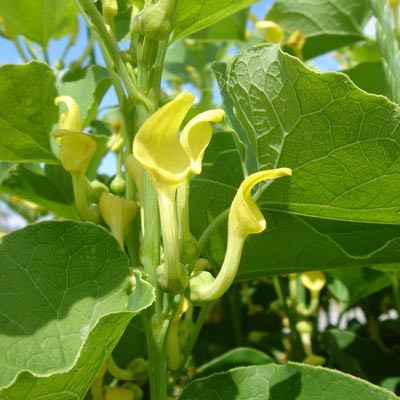 Since 1981, all medicinal products that contain parts of the poisonous plant birthwort (lat.: Aristolochia clematitis) have been banned for humans and animals, since aristolochic acid is considered to be damaging to the kidneys and carcinogenic.

This ban put an end to the use of birthwort (other names: European pipevine, European Dutchman’s pipe) in medicine. It was popular in many regions, and throughout all of history, to treat snake bites as well as stomach and tooth aches, but was also used in gynaecology and midwifery. Its Latin name alludes to this: derived from Greek áristos meaning very good and lóchos, meaning delivery or childbirth. It was also used for abortions, as is already reported by Greek doctor and pharmacologist Dioscorides, in the first century A.D: “It expels the menstrua and foetus when taken as a drink with pepper and myrrh. It works just the same when inserted as a suppository.”

Aristolochic acid is primarily found in the rhizome and seeds, but also in the leaves. Even short-term use can be dangerous: symptoms of poisoning include vomiting, stomach and intestinal inflammation, cramps, accelerated pulse, drop in blood pressure, and death during coma due to respiratory paralysis.

The perennially flowering plant with heart-shaped leaves grows in warm places – happily in vineyards, and in shrubbery, hedges, and riparian forests, on fences and the edges of fields. With its yellow, tube-shaped flowers it is admittedly not so conspicuous as other members of the pipevine family, yet its pollination strategy is similar: with its distinct, slightly fruity smell, it attracts small insects, which slip down and fall through the tube openings into the chamber of the flower. Because the pipes have hairs that point downwards, they are prevented from climbing back up. They are confined for two whole days, but are fed with nectar by the plant. They have then fulfilled their duty of pollinating the plant, and are ‘released’ from their prison.

Although the birthwort is beloved among esoterics as a ‘witches’ plant’, in some Catholic regions it is consecrated as a part of the bouquet of herbs used at the Feast of Assumption (15th August).