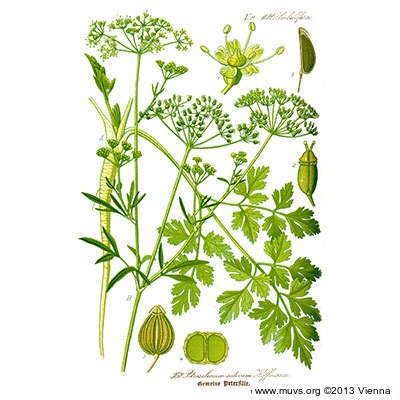 In the comic book Asterix the Gladiator, soldiers in a Roman patrol stuff parsley in their ears to protect themselves from the singing of the bard Cacofonix. However, no evidence exists that the herb really has this effect.

In fact, this culinary herb has been and still is used for both its taste and the healing effect of its essential oils and other components. The most important one is apiol, which Leipzig apothecary Heinrich Christoph Link discovered in parsley oil in 1715. As a tea or tincture, parsley is said to improve the digestion, relieve flatulence and constipation, is a diuretic, and is good for gout, rheumatism, eye conditions and depression. But it can also provoke allergic reactions, and large doses can result in injury to the liver, heart and kidneys, and polyneuritis.

When ground the tiny fruits are used to ward off head lice and itch mites. Crushed leaves keep mosquitoes away.

Parsley has important medicinal uses in gynaecology and obstetrics. In 1855, traditional knowledge from folk medicine was proven scientifically, that treatment with apiol helps alleviate period pains and can bring on late menstrual bleeding. Since apiol stimulates the activity of the uterus musculature, tinctures of parsley seeds or roots were used for abortions in the Middle Ages, though some deaths caused by cardiac arrhythmia, or irregular heartbeat, were reported. In the 19th and early 20th centuries, newspapers and magazines printed adverts for ‘female pills’ containing apiol that were claimed to help all kinds of female disorders, though their actual intended use was for abortions. For example, the medical journal The Lancet reported in 1956 on the death of a young woman who had taken such female pills. Parsley is still used to facilitate expulsion of the afterbirth. Because it stimulates the uterus, pregnant women should use parsley sparingly as a herb only and never ingest it as a tea or tincture.

Since parsley is related to celery, which is thought to cause sexual excitement, it’s believed that parsley leaves also increase male virility, which is reflected in some of its nicknames in German. Parsley was also prescribed for treatment of sexually-transmitted diseases, and it was an ingredient of witches’ ointments and magical herbal preparations. The borders between observations in folk medicine and magic beliefs are fluid in such cases.