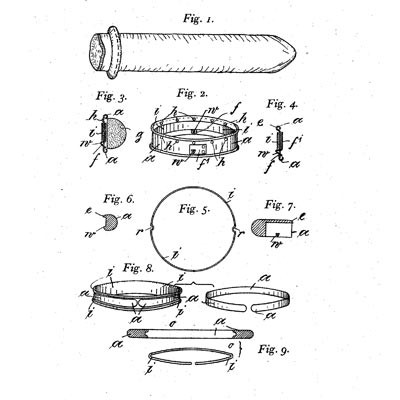 Super thin, `extra sensitive´ condoms are a true luxury of our time. Former generations had to resort to rather thicker or more costly designs – made either of thick rubber, with little flexibility and even less comfort for both man and woman or of expensive natural membranes such as cleaned lamb intestines or swim bladders from fish of appropriate size (e.g. catfish or sturgeon). “Considerably longer lasting, finer and also less perceivable during usage, fish bladder is to be favoured over the rubber, as it scarcely interferes with sensitivity.” (quote from Ed. Baumgartner sales catalogue, Luzern, Switzerland, 1908)

Still, the risk was high that the condom lost its halt and could not be withdrawn again. Striving to avert such perils, a ribbon or a rubber ring fixed to the upper end of the condom should have kept it where it belonged.

Challenged inventive spirits worked around perfecting of these contrivances: Holding without constricting. One of the engineers was Willibald Schaarschmidt of Leipzig. In 1910, the Imperial Patent Office in Berlin registered his `contrivance for holding a fish bladder condom´. The present invention consisted of two stiff telescoped rings holding the condom´s rim. “The rings can be from any material. Advisably, the inner ring is made from a thin metal sheet, while the outer can either be from a metal sheet too or from hard rubber, celluloid etc.“

Luckily such monstrosities have become unnecessary nowadays. The protection against unintentional pregnancy however didn´t improve much since then.