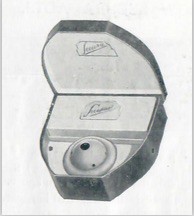 By today’s standards, the contrivances for contraception developed 100 years ago were an absolute turn-off, but, at that time, a real blessing, because contraception was considered immoral and was therefore scarcely possible. Only (thick) condoms, strict abstinence for years or “being careful” were available. “What else is there for people to enjoy in life?” the German doctor Wilhelm Peter Johann Mensinga (1836–1910) asked himself: “... in the face of hardship, disease and debilities, love is the only pleasure poor people have. May the humane-minded doctor only safeguard them, protect them, from the deadly consequences.”

After Mensinga had developed and publicised the diaphragm against fierce opposition – including from his colleagues – many doctors, pharmacists and scientists from all over the world strived to make further improvements: materials, stabilisation methods to prevent slipping, better elasticity and easier application, etc., were among their targets. In 1928, there were already 80 German patents in existence for diaphragms, in line with Mensinga’s credo: “It is the duty of every humanitarian to prohibit conception wherever the life, health and welfare of the mother appears endangered by the prospect of (further) pregnancies.”

One of these innovations was the “Secura” combined air-cushion pessary from the Wismar veterinarian Dr Wilhelm Leonhardt (1875–1942). In addition to his career as a military veterinarian, he was also an inventor and experimenter. He set about improving the “inflatable pessaries” used in Russia, which were inserted in a collapsed state into the vagina and then filled with air from the outside, like a kind of air-cushion rubber balloon. These close so as to be impervious to semen and are simple to insert, but are easier to damage and rather annoying to use due to the protruding part through which the air is blown.[1]Leonhardt’s further developed version consisted of a rubber pouch to which a thin tube was attached. This rubber pouch was inserted into the vagina with the help of a glass tube (inductor) and inflated with air to prevent it from slipping. After use, the air could be let out again, and the rubber pouch removed from the vagina. Leonhardt presented his invention in 1928 at the Medical Congress for Birth Control in Berlin, and, the following year, at the Third International Congress for Sexual Reform in London, where it received international recognition and was praised by specialist physicians assafe. In addition, Leonhardt developed the “Secuplast” ointment for preventing sexually transmitted infections together with the pharmacist H. Möller from Wismar.

Maternity rights, birth control and sexual reform were very important to him. However, birth control was fiercely opposed by emerging National Socialism; its goal was rather a “National Socialist population policy”. Leonhardt’s activities appear to have soon been politically undesirable; he was arrested by the Gestapo in 1941 and, in 1942, was deported to Sachsenhausen concentration camp, where he died in June of 1942. The “official” cause of his death wastuberculosis. In August 2013, a “stumbling stone” – a brass-plated paving stone commemorating an individual Nazi victim – was dedicated to his memory in Wismar.