“The Law for the Prevention of Hereditarily Diseased Offspring is a truly revolutionary measure” (Adolf Hitler, 1934) 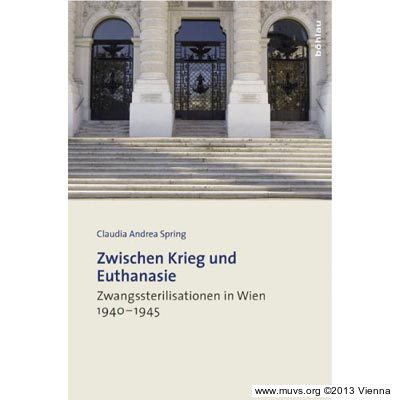 In Vienna alone, 1200 women and men were subjected to compulsory sterilization during the Nazi period; 6000 across the so called ‘Ostmark’ and at least 400 000 across the Third Reich in its entirety. The compulsory operations were legitimised by the 1933 National Socialist ‘Law for the Prevention of Hereditarily Diseased Offspring.’

The Law covered compulsory sterilization and abortions for women who were deemed ‘hereditarily defective’ – up to the end of the sixth month of pregnancy!

In order to make sure that infertility was absolutely reliable, it was usual to partially remove or crimp and tie off both fallopian tubes. However, the law also provided for repeated exposure to x-rays or radium rays, which was intended to disturb the function of the ovaries and disrupt the mucuous membrane of the womb – both of which are comparable with castration for the women affected. These methods were still experimental and meant that the injustice and cruelty of sterilisation was further compounded by physical and psychological injuries.

As Nazi history has been much written about elsewhere, we can now concentrate on more current challenges, such as research on provenance (of looted valuables), restitution or the debate about memorials. There are some subjects that have so far tended to be ignored but speculating as to why that might be is a moot point. It is a fact that forced sterilisation is not a particularly pleasant subject, and that is how a taboo comes to be perpetuated.

Claudia Andrea Spring has tackled the subject, which is praiseworthy in itself. Moreover, she has tackled it so thoroughly and unstintingly that her book has enabled the subject to be brought in from the cold. Spring has looked at every relevant archive, examined every file, and hunted down every piece of information, large or small, and thus has been able to document in detail the implementation of the law in Vienna. She explains the procedure and names the institutions and the people involved.

The racial medicine of the National Socialist period has both a before and after story. The story of what came before, namely attempts at eugenics since the 19th century, is covered fairly briefly, but is explicitly not the focus of the book. The story of what came after the Nazi interventions continues up to today and is the author’s great achievement: the subsequent fates of the judges and doctors involved as well as the helpless fight by the women and men who were forcibly sterilized for recognition of their status as victims and the ensuing compensation. Thanks to her skills as a historian and expertise in social work and social pedagogy, the author is able to present the subject in a way that explains the current need for negotiations.