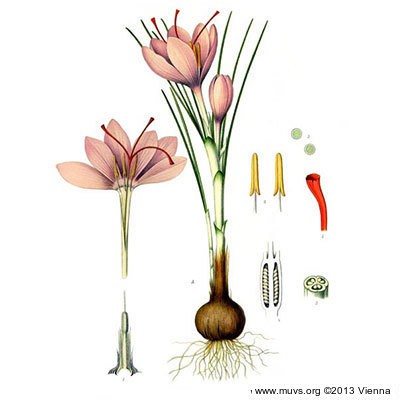 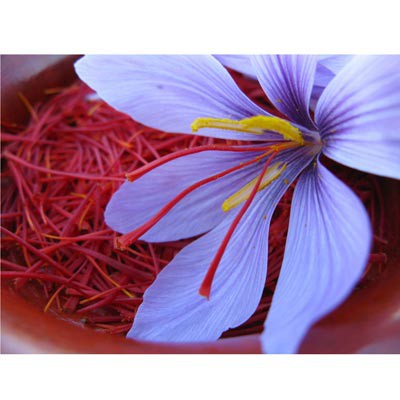 “Eating saffron makes one laugh, and if one eats too much, one laughs so much that one is in danger of laughing oneself to death.” in 1626, the Mughal emperor Jahangir wanted to test whether this legend is true: he gave a prisoner sentenced to death a large quantity of saffron – without ‘success’. Again on the next day, when he had twice as much saffron administered to the man, it did not lead to the anticipated result.

In fact, it has ‘always’ been said of saffron that it has the effect of brightening mood, and is therefore suited to the treatment of melancholy and conditions of hypochondria and hysteria. Perhaps this hypothesis is based on an association with its ‘sunny’ and ‘cheery’ colour. Rich Romans are said to have strewn their wedding beds with saffron threads —possibly an explanation for the Latin saying dormivit in sacco croci (he slept in a bed of saffron), which was used to imply a state of carefree gaiety.

Today we primarily use saffron to flavour and colour rice, paella, bouillabaisse, and other dishes. For centuries, the beautiful yellow colour also made saffron very valuable as a plant dye for wool, silk and cotton: in ancient Rome, the edging strips of the toga, the attire of magistrates, are said to have been dyed with saffron. In many cultures, saffron was used to colour wedding veils.

In the ancient world, only the rich could afford saffron; it was considered a select gift for emperors, kings and popes. Due to its high price, saffron was, and is, frequently ‘thinned’ with gypsum, flour or talcum powder, or substituted by other plants: for example, ‘saffron’ can be made from dried marigolds or safflower blossoms. Correspondingly, there were harsh penalties for imitations, theft and smuggling, such as being buried alive.

The plant originally came from Crete and does best in poor, almost sandy, soil, on steep, sunny to half-shaded slopes. Today we find it from the Mediterranean region, across southern Europe, Asia Minor, India and Pakistan, to China. The best saffron comes from Spain (Coupé and La Mancha). But in the Lower Austrian Danube region too, high-quality saffron was cultivated from c. 1300 up until the 19th century: crocus austriacus. It was deemed the best saffron available in Europe. Since 2007, there have been renewed attempts at cultivation on the riverbank of northern Wachau.

Saffron was also used medicinally. It contains crocin (a pigment), crocetin, picrocrocin (a bitterant), safranal, riboflavin and an essential oil. However, due to both its high price and its unfavourable risk-to-benefit weighting, this practice has largely been abandoned. Its ingredients are still not possible to be manufactured artificially, though the European Commission is sponsoring a research project along these lines.

The following effects are attributed to this plant: it acts as an aphrodisiac, promotes menstruation and induces abortion. Dioscurides recommended saffron as a remedy for increasing urine flow, for watery eyes, and gynaecological disorders. Furthermore, saffron is considered to be analgesic and anti-inflammatory, and is also used for asthma, coughs, and stomach cramps. In folk medicine, it is still occasionally used to stimulate digestion. It should not be taken during pregnancy. In higher doses (more than 1.5g) symptoms of poisoning can occur, which can manifest themselves through vomiting, intestinal colic, uterine and mucosal haemorrhages, stupor, giddy spells, yellowing of the skin and mucous membranes, or central paralysis.