British Album with Advertisements for Contraceptives 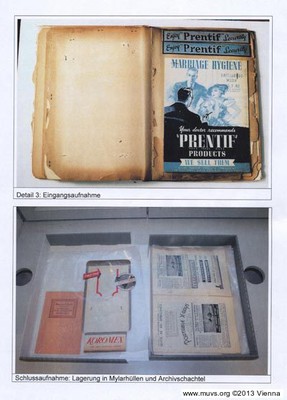 Approximately 400 brochures, price lists, labels and advertisements, the majority for contraceptives, can be found in a dark-red album from the first third of the 20th century. In 2005, it was donated to the Museum of Contraception and Abortion by Great Britain’s Family Planning Association.

Most of the items in this album are in English, 21 are in German and three in French. Who compiled it and why are unknown.

The album itself was heavily damaged due to being stored under poor conditions and was falling apart. Since the value of the information it provides is limited and in order to prevent further dirtying of the individual items, it is no longer part of the collection. Paper restorers have removed the individual pages and placed them in chemically unobjectionable Mylar sleeves.

The items are arranged alphabetically, and most of them were glued in. More than half (52%) deal with barrier methods employed in the vagina: The majority are advertisements for antiseptic, spermicidal foaming vaginal suppositories.

Condom advertisements or packaging represent approximately one-fifth (18%) of the items.

Eight per cent of the contents comprise catalogues listing a variety of products. Quinine suppositories (so-called quinine pessaries) are mentioned frequently. Large doses of quinine, the active agent, trigger uterine cramps, which can result in a miscarriage. While they were used for abortions, this fact is not mentioned in the text (examples: a2422, a2430, a2449, a2136, a2473).

Solely three per cent of the items involve the use of douches. The remaining items are miscellaneous literature on birth control and order forms and advertisements for contraceptive products.

The frequent mention of scientific information relating to the ‘necessity of contraception’ reflects the extent to which thorough justifications were still necessary in this area (example: a2423). Example a2395 mentions the opinion of the House of Lords, that the lower social classes must have access to contraceptives.

There are also references to the theories of Thomas Robert Malthus, such as in materials relating to neo-Malthusian products (a2486).

A recurring theme in the advertisements for contraceptives, the ‘doctor’s recommendation’, can be found in both texts (example a2112) and illustrations (example a2788).

Examples that are interesting in a political and social sense include a2395 (preventing overpopulation for the good of the homeland is a patriotic duty) and a2441 (planning to ensure a family’s happiness. A woman giving birth while suffering from some kind of illness is unthinkable). An idealised depiction of a happy family and marriage made possible by use of the product being advertised is in line with these ideas (examples: a2423, second image, and a2489).

Ordering was facilitated, and discretion was ensured, by the inclusion of order forms in many cases (example: a2250).

A conspicuous element is the association of the theme’s ‘pure and natural’ aspect. The advertisements are well organised and easy to read, and the general appearance is harmonious and non-threatening. The typefaces are typical for the time (serif).

The frequent use of various shades of blue and grey in combination conveys tranquillity and permanence. For the most part, there are no photographs. Most depictions of products are aesthetically decorative and finely illustrated (example a2449). Where appropriate, the technical details of use are indicated (example a2413).