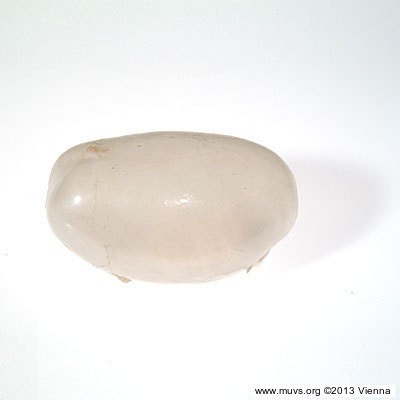 “The best and most reliable method of contraception cannot be used by the woman, but only by the man. This is the condom, a thin membrane made of rubber, or better still of gut, that is pulled on over the male member before intercourse. Rubber condoms cannot be recommended quite as highly as the condoms that can be found for sale under the name “fish bladders”, which are made of thin gut, the so-called “gold-beater’s skin”. Usually each condom, which should only be obtained from the larger sanitary-ware stores, can be used more than once, which significantly reduces their cost. However, even with the best kinds it is impossible to guarantee how long a condom will remain undamaged.

For that reason, it is advisable to always use two condoms as follows:

The bladder should be doused generously in water and pulled on carefully and comfortably over the member; this is then repeated with a second condom, which has to be lightly greased. After use, or a few hours later, both should be washed out with cold water, which also allows them to be tested for permeability at the same time. Each one is then stuffed with a smooth-pile towel and dried in a stretched position. After drying they are carefully detached and checked for tears by holding them against the light. If either condoms shows any such small tear, it must be exchanged for a new one. However, it is enough to double up the top bit, so that only the cut-off cap of the first condom is used and the second condom is full length. Modern technology has also produced condoms manufactured from thin rubber; these are less highly recommended than those made out of gut, because they are too tight and can easily affect sensation. When using rubber condoms you should take care that they are not too old, as they become brittle and split if they have been stored for longer than a year. You should therefore purchase them from larger sanitary-ware stores, which guarantee that those they sell are newly manufactured.

In truth in condoms made from gut, so-called fish bladders, and in rubber condoms in the second instance, we already today have a method of prevention that meets all requirements and should be prioritized over every other method, for the use of condoms does not affect sensitivity in any way, yet it also prevents damage to health.