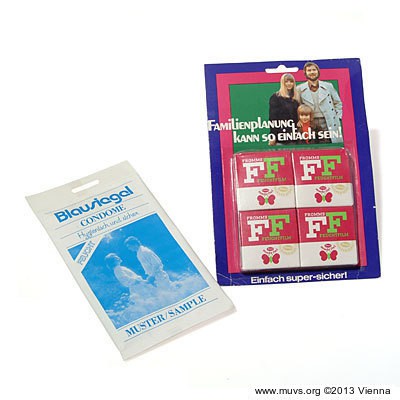 Condoms were originally designed to be protection against syphilis and other sexually transmitted diseases. They were previously made of linen, in which light, the surviving comment of Casanova’s (1725-1798) becomes understandable: “condoms are a bulwark against pleasure, but a cobweb against danger”.

Since then, condom production has been revolutionised. The first latex condoms were initially manufactured using the milk of the rubber tree. Nevertheless, these were at first very thick. Only after the invention of vulcanisation, by Charles Goodyear in 1834, did it become possible to produce elastic, durable condoms. In the years that followed, production was continually improved, so that they became ever thinner and ultrasensitive. The newest invention is a latex-free condom that can also be used by people with latex allergies. The condoms available today all meet high quality requirements (DIN standards) and differentiate themselves merely through details such as size, colour and taste.

Condoms were, and are, sold under a great variety of names, which serve as a mirror for the prevailing societal problems and trends of each time: in the 50s/60s, family planning was at the forefront: the ‘anti-baby’ condom. In the 70s, names like ‘Sensitive’, ‘Pleasure’, ‘Just for Fun’ etc. predominated. With the onset of AIDS then surfaced names like ‘Lifeguard’ and ‘Protector’. Also the new millennium and the expansion of the EU were immortalised: e.g., ‘Euro-Glider’.

Condoms are very efficient protection against sexually transmitted diseases, yet only moderately suited to use as a contraceptive against unwanted pregnancies. To use them correctly requires a sex life that is planned and lived very consciously. While some couples are able to prevent pregnancy very well with them, the majority agree with Casanova’s assessment.