Eugenics in Austria – Biopolitical Structures from 1900 to 1945 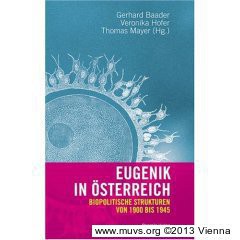 The apparently, highly personal decisions against or in favor of contraception and abortion have been a popular playground of outside interest groups in the past, and remain so to this day.  Everyone has always wanted to have the final word: the Church, State, Military, Business, Medicine and Patriarchy. For this reason, around 25 years ago, the author Katharina Riese was already able to pose the question, In Whose Garden Grows the Fruit of the Womb?

The field of Eugenics (genetic health study, research and care) claims to be value-free and without self-interest in its attempt to limit the possible spread of pathogenic genomes within human populations, while on the other hand maintaining or increasing the pool of desirable genetic material. Humanitarian aspirations are here on thin ice. It is not without reason that the term ‚Eugenics’ is fatally associated with the ‚euthanasia’ policies of National Socialism.

Yet the Eugenics movement is different and far older. Eugenic goals determined discourse in regard to public health in many nations after the decline of the Hapsburg Empire, due to an expanded political spectrum also to be found in Austria before 1938. The economic justification behind protecting public welfare from danger lead to a bio-medically defined notion of 'the people' as a collective entity.

Since Eugenics has had a huge impact upon today's laws, a closer consideration of the Eugenics movement is of interest to an institution like the Museum of Contraception and Abortion. Especially sterilisation, contraception and abortion were discussed as viable methods to maintain the health of the genetic heritage. Although abortion was illegal, some Eugenicists recommended coerced abortions in cases that were likely to involve physically or morally 'inferior' offspring.

Yet even this extreme standpoint did not lead to a lifting of the abortion ban. Even Eugenicists were not in agreement about a general authorisation of abortion. For this reason, a proposition submitted by the Social Democratic Party in 1920 to legalise abortions within the first trimester failed. It took six more years before abortion was changed from a crime to a misdemeanor. Yet pregnant women were to continue being prevented from deciding for themselves whether or not to have an abortion.

While contraceptive methods were in wide use (for economic reasons) during the period between World War I and World War II, access to contraceptive methods after the rise of National Socialism was made difficult (for political reasons).  Attempts to prevent eugenically undesirable pregnancies were made through sterilisation and the barring of marriages. Finally, the ‚Law to Protect Against Genetically Diseased Offspring’ was passed in Germany in 1934 - yet this was not a new development - but rested upon a sterilisation law proposed during the Weimar Republic. The decision regarding abortion and sterilisation rested (solely) within the jurisdiction of the appropiate regional government authority. Abortions based on eugenic considerations were allowed to be carried out up till the end of the sixth month of pregnancy. But since many doctors were inexperienced, innumerable women died as a result of their surgical intervention. Every other abortion was forbidden and as of 1934 was punished with the death penalty (and these sentences were enforced till the very end of the war). And so it came to pass that as late as in Spring of 1945, an abortionist was executed in Vienna.

For the first time, a publication observes the specific and broad outlines of the post-Hapsburg, Austrian Eugenics movement, indicates consistencies as well as inconsistencies in the debate and shows that the ‚knowledgeable society’ of Austria between WWI and WWII not only perceived itself to be at a scientific high point with its Eugenic aspirations. It also extracted a sense of moral contentment for the contribution of its resources to the social health and physical well-being of the country. This book is an essential attempt to depict the mental and material foundation of Eugenics in Austria.