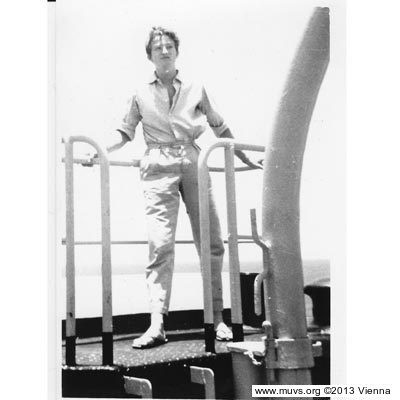 From 1964 to 1967 I was in the German merchant marine and spent most of that time in Central and South America. The port calls in Brazil, Venezuela, Colombia, Costa Rica, etc., provided an opportunity to visit ‘working girls’ there. After having sex they disappeared into the shower, usually with a hose that was about 1.5m in length (every girl had her own). The shower cubicles were built of brick and plastered rather than tiled, normally just under a square metre in size, and they had concrete floors.

A water pipe with a valve at hand level stuck from the floor near the front wall. Then there was a lever behind that, and a pipe went upwards, ending in a shower head.

More than once I tried to explain the dangers involved in doing this (infection, sterility), but was told that it was the only way.

At the time the sailor’s association passed out condoms (Seagull brand), but they were thick and dry, and neither the sailors nor the girls liked them.

Then, in 1967, I bought a year’s supply of birth-control pills in Hamburg and ‘exported’ them. Demand, however, was limited.

When I told people at home about this, an aunt explained that a similar method of contraception was used around 1930 in our little village: a hose was stuck into the kitchen tap (there were no bathrooms at the time), the water was turned on, and the woman sat on a bucket, inserted the hose and rinsed her vagina.