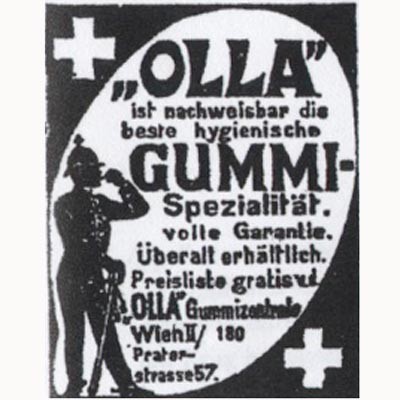 An almost forgotten horror of WWI was the rapid spread of the dread STIs syphilis and gonorrhoea (the clap), which resulted in popularisation of the condom. “During WWI, all countries involved were to some extent aware of the dangers sexually-transmitted diseases posed to the troops’ fitness for action and fighting strength.”

Few treatments were available at the time, and the effectiveness of medicines then in use left something to be desired. But the protection provided by condoms was well-known. For this reason, German soldiers were ‘officially issued’ condoms, and instructions for enlisted men‚ warnings and examinations ensured that they were really used. Great Britain and the United States hesitated, because moralists at home feared that easy access to condoms would promote extramarital sexual activity. Not until 1917, after STIs had put approximately five per cent of all British soldiers out of action for weeks at a time, did the distribution of condoms begin.

US forces lost nearly seven million person-days to these diseases and were forced to discharge about 10,000 ill soldiers. In contrast to today’s sheer latex condoms, US military authorities distributed significantly thicker rubber models that could be reused several times. Men who had already been infected were issued Dough-Boy Prophylactics.

Wartime brothels were established, where the use of condoms was obligatory and the women who worked there were subjected to regular medical examinations. In the case of unregulated prostitution, the situation was much different. In 1915, an Austrian eyewitness wrote: “The losses among our army caused by sickness after intercourse with such women are supposedly extremely high....”

WWI also influenced social welfare law. Just one week after war broke out, Germany’s Reichstag approved a petition submitted by the League for the Protection of Mothers calling for extending the planned increase in aid for the families of fallen soldiers to unmarried women and ‘illegitimate’ children.