In Bed with the Government 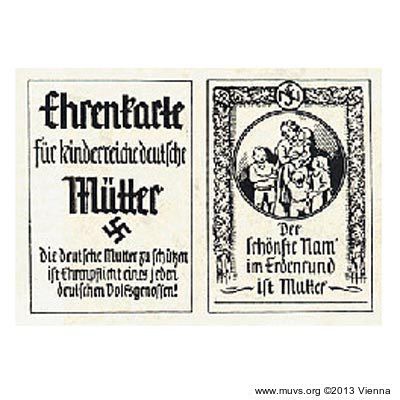 Adolf Hitler wrote the following in his Mein Kampf: “The People’s State … must proclaim the truth that the child is the most valuable possession a people can have … and it will have to be the supreme protector of this greatest blessing that a people can boast of.”

Of course, this applied solely to ‘Aryan’ children. In order to ramp up ‘output’, the use of contraception was made virtually impossible, and being an abortionist was punishable by death.

A number of the measures taken to hush women back to the kitchen sink and make them produce offspring are widely known. Some examples are the ‘Federal statute modifying and supplementing the penal statute concerning protection of the unborn’ (1937 amendment to the Penal Code), the ‘Cross of Honour of the German Mother’ (1938) and the ‘Police by-law concerning procedures, means and instruments employed in interrupting or hindering pregnancies’ (1941).

There were, however, more subtle forms of coercion, for example the law altering the income-tax system (February 1939): it eliminated tax benefits intended to promote the employment of domestic help, at the same time implementing an increase for unmarried persons and a higher tax class for married couples who failed to have children after five years of marriage and whose income exceeded a certain level.