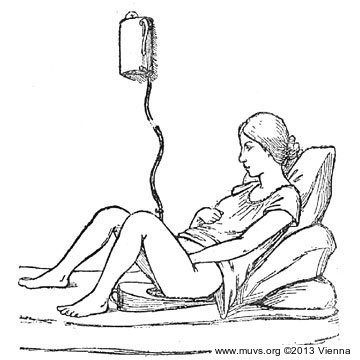 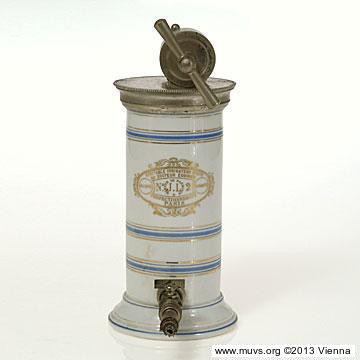 One of the most common contraceptive methods in the 19th century was the vaginal douche, 'Irrigateur Eguisier'. It consisted of a cylindrical supply vessel made out of metal or porcellan, from which a rinsing fluid would pass through a controllable pump system to a hose. Thanks to the pump mechanism, the douche was independent of gravity and water pressure was easily controlled.

This douche/rinsing apparatus was presented in 1843 by Parisian doctor Maurice Eguisier (1813-1851) and medical technician François Libault. It was designed for all bodily orifices, providing a rinse for the bladder, the ear, the sinuses and the intestines, among other things. It quickly established itself as a vaginal douche: The addition of sperm killing substances was intended to prevent pregnancy. Compared with today's contraceptive means, the method was not very reliable, but given a lack of other options it was frequently practiced. From our perspective, the application was tedious and frustrating: The rinse had to take place immediately after intercourse and was inconvenient since most apartments did not have their own bathroom; additionally, the rinsing fluid was unpleasantly cold and the ingredients irritated the sensitive mucous membrane of the vagina and the uterus.

The 'Irrigateur Eguisier' was produced by many manufacturers in various sizes and designs and was to be found in practically every household in the 19th and beginning of the 20th century. Lovely painted examples can still be found today at flea markets and through merchants, yet the knowledge of their original purpose has been lost.

A vaginal douche would be performed using an irrigator like the one shown in the picture, consisting of a one-litre container made of glass or metal, designed so that it could be hung. At the bottom is an aperture to which would be attached a long rubber hose (1.5 metres), at the other end of which is a glass extension shaped like a bended knee (main tube).

To apply the douche, the woman would usually lie across the bed, on her back, with her bottom in line with the edge of the bed so that, with her knees bent, she can rest each leg on a chair. In a squatting position the woman inserts the main tube into her vagina and by opening the tap the rinsing fluid, which should be at body temperature, is allowed to flow in from the irrigator which is hung up to the side. The used rinsing fluid is conducted away by the waterproof pan, over the edge of the bed into a bucket.

Picture: an irrigator; a woman applying a douche