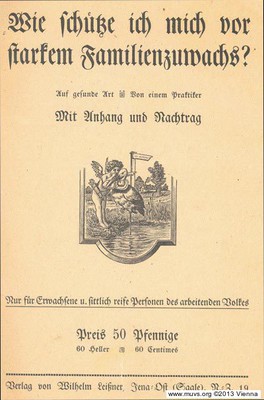 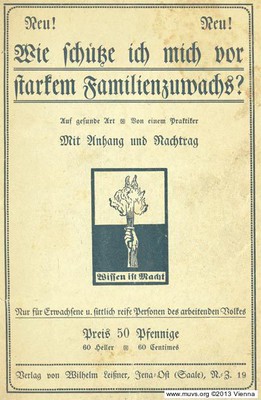 Many of mankind’s attempts to control fertility make us wonder about the ignorance on this subject. A large number of educational publications dating from the first half of the 20th century tried to reduce the ignorance. Their authors often had to face censorship and threats to their existence.

The 1912 booklet “How to avoid heavy family growth” very clearly states: “It is not correct to let people stay in darkness regarding sexual issues as undoubtedly many families would economically be better off if father and mother were more enlightened about sexual matters. This concerns mainly how to avoid having too many children.”

“My doctor warned me against another pregnancy because I would not survive it; but he did not tell us how to go about this”, a desperate woman wrote to Maria Stopes, one of the pioneers of contraception.

“Sexual abstinence” seems to have been a common advice – especially from those who were (no longer) concerned themselves. However, the above mentioned booklet confesses that such advice is hardly a realistic one, although nowadays we may no longer be able to follow the reasoning: “The total refusal of any intercourse with the male spouse to avoid pregnancies is neither necessary nor advisable since the male spouse might be urged into dubious ways. In the case of an unfavourable bodily disposition of the male spouse it would even be wrong because even with the latter nature demands its rights and onanism would ruin his body even more.”