Knaus’s theory of counting days spurred on many inventors from all around the world to develop corresponding calculation aids, mostly charts and dials. The writer and inventor Walter Thiele, from Oberstdorf in the Allgäu, develops a contraceptive clock with Knaus’s blessing: “An alarm clock that – in a similar fashion to traffic lights on the street – controls intercourse.” In 1956, Knaus presents an invention of his own: ‘The Chin Sling’, as an anaesthetic aid. “The dangerous repercussions of the lack of oxygen due to restricted breathing prompted [me] to attempt to prevent snoring, or subdue it as far as possible, using an appropriate tool, so that the flow of air to the lungs is not impeded.” He recommends his invention for household use as well: “Snoring […] causes […] an unpleasant aesthetic sensation that can quash any sympathies originally harboured for the snorer.” 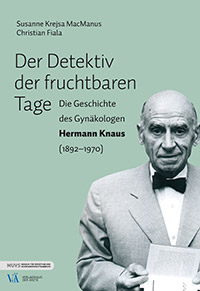