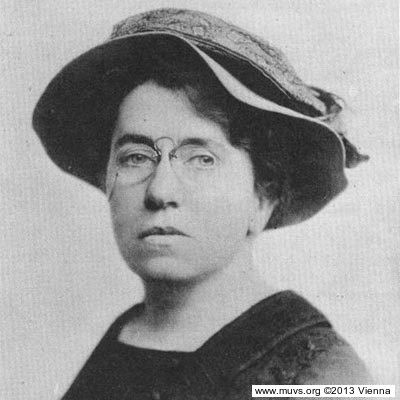 The ideological motivations of the women and men who campaign for birth control and family planning could not be more diverse: their motivation may be social, or based on economic considerations, be concerned with medical care, women’s rights, human rights... and for each of these motives we could list several examples. For members of political movements, especially the anarchist movement, the motives for supporting abortion were and are often connected with wanting to make contraception and abortion freely available because they do not believe the State has the right to determine these individual needs.

Emma Goldman (27th June 1869 – 14th May 1940) was one such anarchist who fought against the exercise of any form of power and oppression in general, be it private ownership, slavery, wage exploitation, religion, marriage, state and the military. She became aware of the potential of birth control through participating in a Paris conference discussing condoms and other contraceptive methods. She saw contraception as an instrument that could prevent the human suffering caused by the burden of large families. Women of all classes should be able to enjoy sexual freedom, should have a right to prevent themselves from having (more) children and should be able to express their wishes openly, even if these contradicted the prevailing opinion.

Goldman was born in Lithuania and grew up both in the Russian Empire and in the Prussian city of Königsberg. She started out working as a corset maker in a factory, where she came into contact with the ideas and works of revolutionary anarchists. At seventeen, she moved to Rochester, New York, where she again worked in a textiles factory and in 1887 married her co-worker Jacob Kershner, in order to obtain American citizenship. The specific impetus for Goldman’s anarchic activities was the conviction of four anarchists after the Haymarket Affair – the violent confrontation in 1886 that denotes the emergence of the American workers’ movement.

Contraception instead of Abortion

In 1916 her campaigning for contraception resulted in Goldman’s conviction for violation of the Comstock law. The US politician Anthony Comstock (1844 – 1915) was a fervent stickler for Victorian morals and sniffed out offences everywhere; all information about birth control was therefore deemed illegal, obscene, prurient and lascivious. The law that bore his name was not taken off the statute books until 1936.

From her own experience as midwife and nurse, the feminist Goldman saw for herself the dubious methods women were using to prevent the birth of further children, whom they couldn’t afford to feed (either). Goldman was asked to perform abortions but refused because she saw that it would do nothing to tackle the social problem. She therefore fought for birth control as a positive alternative.

Emma Goldman disseminated her opinions in a plethora of presentations and a series of articles and books. From 1906 to 1916 she published the newspaper 'Mother Earth', which she filled with anarchic-feminist content. She went to prison three times for her campaigns. She died in 1940, in Toronto, Canada.