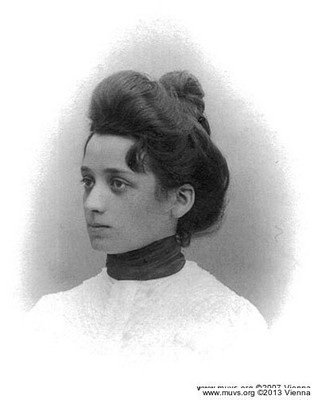 The later ‘anarchist feminist’ Margarethe Hardegger had a conventional upbringing: born in Bern, her father an employee at the telegraph office and her mother a midwife, she completed an apprenticeship as a telephone operator, did her A-levels, married at age 21 and gave birth to a daughter.

But Hardegger started to rebel after that: she founded Bern’s textiles union and met the leader of the Swiss workers’ movement, continued her political activities with a large-scale campaign against a spinning mill, and was elected the first secretary of the Swiss Federation of Trade Unions in 1904. Hardegger travelled, gave speeches, and wrote tirelessly, trying in this way to reach as many (working) women as possible. In 1907, she helped organise the first women’s strike in Switzerland (workers at a chocolate factory) and fought for women’s suffrage, sex education and widespread availability of contraceptives. It was said that while she was “merely a weak woman, she possesses the gift of gab, stirs up trouble, and goes down well with women in particular. She encourages women’s suffrage, supports expensive health insurance for women in childbed, and generally preaches ‘emancipation’. [...] She propagates limiting the number of children and give lectures concerning means that can help to that end.” This did not meet with wholehearted approval from her companions. Hardegger was eventually arrested and convicted of distributing ‘indecent’ literature, and in 1909 she was ousted from her position as the Federation of Trade Unions’ secretary.

Her activities shifted from Switzerland to international labour relations. She supported conscientious objectors, spoke up for abolition of the army, organised smuggling of anti-militaristic propaganda, and provided a false alibi for an anarchist in court. Beginning in 1909, she publicly called for the abolition of marriage and for free love, and became the secretary of the Reformorganisation Internationaler Orden für Ethik und Kultur (Reform Organisation of International Orders for Ethics and Culture). In 1914, Hardegger founded a commune in Bern, then moved the group into the countryside, but the model failed. More communes were established, and Hardegger got involved in the Freiland-/Freigeldbewegung, which followed the ideas of Freiwirtschaft, or natural economic order. A complete list of all her political activities would be much longer, but a unifying thread can be recognised: Hardegger fought the power of the state, refused to obey it, and disputed its legitimacy.

“I’ve Peered into Certain Miseries in the World of Women”

Her commitment to matters involving contraception can be considered similar: Hardegger disseminated information about products, gave consultations, and set up her own sales organisation. She eventually found a Brussels Malthusianist, Dr Fernand Mascaux, who would serve as a reliable and inexpensive source of ‘contraceptive suppositories’‚ selling 24 for 3.50 francs. But in cases when a woman was already pregnant, her mother, who was a midwife, or a woman doctor with similar political views often helped. Hardegger performed tests with medicines, most importantly Miodine, which effectively terminated early-stage pregnancies. Since Hardegger had herself gone through a gruesome abortion in 1908, she wanted to perform herself in a superior and learned way. This however soon became too dangerous, as there was a great risk of her being imprisoned for many years.

Beginning in 1915, she started working with a doctor who performed the abortions. If patients were unable to pay his fee, she loaned them the money. That same year, a criminal complaint was filed against her: “Hardegger has indicated that she is an anarchist, and there is no doubt that she has performed abortions of foetuses on a commercial basis for some time now.” However, thanks to her knowledge of the law, Hardegger was able to defend herself in court quite well: “Because of her work in the field of labour relations, she was familiar with the fear that working women have of pregnancy; this fear must be stronger in light of the living and working conditions that have been made more difficult by the war. They tried to avoid it not out of recklessness, but consideration of the child. They are also familiar with dangerous means they use to help themselves. According to Hardegger, advising against this is pointless if they are not provided with more suitable ones, and she admitted that she herself is unable to help them, but knows of a doctor who could.” In the end, Hardegger was convicted of aiding and abetting abortion and sentenced to ‘only’ 12 months of prison. She was sent to Hindelbank women’s prison, which was infamous for primitive conditions and brutality.

When released from prison, Hardegger was in her mid-thirties. She continued to work toward political goals and attempted a great deal, but her contemporaries gradually disappeared and she was no longer able to regain her footing due to financial difficulties and problems in her family life. “What was most painful for her was that she barely had enough time or energy to work on the book that was to be her political and human legacy.” Hardegger died in 1963, surrounded by her family. Her politically significant estate has been lost for the most part.