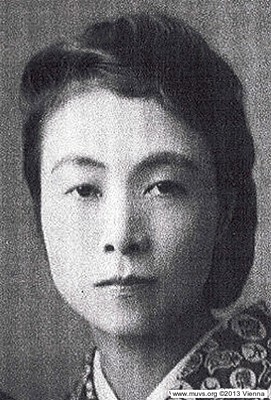 Ishimoto Shidzue (1897-2001) was born into an affluent, ex-samurai family but grew up familiar with Western culture. Her first husband, Count Ishimoto Keikichi, was a Christian humanist interested in social reforms who took his young wife to the coal mines in Kyushu where he was a mining engineer. Living with the poor coal workers – males and females, adults and children – they experienced their unsocial, unhygienic and unhealthy living conditions. The Count began to turn away from his Christian humanism towards radical Communism based on the Soviet model, and after three years moved to the USA in order to fight for the workers’ movement.

Meeting Margaret Sanger at the beginning of the 1920s proved a turning point in Shidzue’s life. She realised that her true goal was to bring birth control to Japan, in order to give women control over reproduction and allowing them to plan their families responsibly rather than suffer the miseries of unwanted children. The military regime in Japan during the 1920s and 30s was fiercely hostile to limiting the country’s growing population and in December 1937 she was arrested. After being detained for two weeks she was forced to close her clinic in Tokyo which had been started thanks to funds from America.

As a feminist Shidzue had to fight against the taboo of being a Japanese woman who had stepped out of her traditionally submissive role and who had taken a social initiative. Furthermore in the circles in which she moved, the subject of birth control was definitely the least mentionable one.

In 1946, when Japanese women were given the right to vote, Shidzue Kato (in 1944 she had married the prominent socialist leader Kanju Kato) became a member of the Japanese Parliament. Up to her death at the age of 104 she continued to work tirelessly for women’s welfare in Japan, especially for their right to family planning.