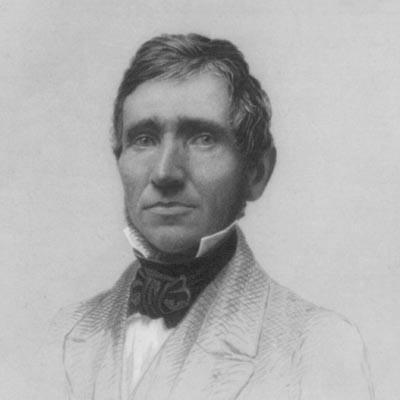 Whether he himself used condoms is not known. What is certain is that the US American Charles Nelson Goodyear (1800 – 1860) was married and had children. For them, it was difficult to have a pennyless inventor as a husband and father, a man who was obsessed with his idea of transforming the natural rubber substance caoutchouc into a stable product by incorporating various additives. For pure rubber becomes soft and sticky when heated, but cold, it is brittle and splinters, like porcelain.

Success was a long time coming: for eight years he had to experiment and research, enduring poverty, disease and stays in prison due to an inability to pay his debts. He also accepted that he was universally ridiculed and derided: he wore the fruits of his efforts on his own body – coat, hat and shoes were made from rubber.

The conversion of natural rubber (caoutchouc) into rubber is acredited to an occupational accident in Goodyear’s laboratory: a mixture of sulphur and natural rubber got overturned and fell onto a hotplate. The result was rubber as we know it today: dry and permanently elastic, stable even at extreme temperatures. We call this process vulcanisation.

Goodyear’s credulity became his downfall: he had not patented this new process, meaning that his competitors Thomas Hancock and Horace Day could claim the copyright for themsleves. This resulted in a long legal battle.

The first products that Goodyear manufactured from the new material were rubber gloves and tents. Rubber tyres for cars had not yet been invented back then. But rubber could be used for something far more important: condoms. From 1855, Gooyear produced condoms that took the market by storm, even if they were dreadful by today’s standards: 2 millimetres thick and with a lengthwise seam. Today they are 0.06 millimetres thick! But they were better, pleasanter and cheaper than the condoms that had been used up until that point, made from animal skins and fabric. The new rubber condoms were precious too though: they were therefore washed after use, greased with vaseline, and stored in a small wooden box until the next time. The Irish writer George Bernard Shaw vocalised what likely all were thinking: he identified the condom as the greatest invention of the century.

Years of experimenting with metals and chemicals, together with poverty, had ruined Goodyear’s health. He died at sixty. The tyre manufacturing company still in existence today was founded only years after his death and named in his honour.