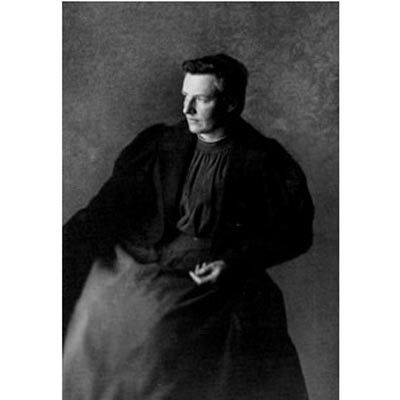 This quote is from 1896. It was written by the female doctor and social reformer, Hope Bridges Adams Lehmann (1855 London - 1916 Munich).

It is interesting in a number of ways: On the one hand because back then, there hardly existed any effective contraceptive methods as we know them today; and on the other hand, because the production, advertising and sale of contraceptives had long been forbidden and physicians themselves had little to do with contraceptives; and finally, because of the Eugenic conviction that can be gleaned from the implication of Lehmann’s comment, alluding to how poor health and living conditions of families undermine the development of healthy offspring.

Hope Bridges Adams Lehmann was one of the first women who studied medicine in Germany – despite the fact that every imaginable obstacle was put in her way. She practiced general medicine as of 1882 with her husband Otto Walther in Frankfurt-on-the-Main. She worked in Munich with her second husband who also was a doctor, by the name of Carl Lehmann. Her dedication to birth control and the liberalisation of the abortion ban lead midwives to report her for "advanced crimes against life" in 1914. However, these accusations were proven unfounded and the suit was finally dismissed.

The doctor had in fact carried out abortions, yet misconduct could not be proven. She had kept precise medical records which convinced the court of their necessity. "Where might I have excercised caution? Perhaps by disguising the evidence of indicated cases and rejecting them? The rejection of indicated cases would be a violation of the physician's oath. A doctor cannot deny help on the basis of personal discomfort to a patient who entrusts the doctor with her care -- just as a doctor cannot neglect visiting an infected patient even if it might lead to his own death."

For new rights and duties for women

The beloved and prominent physician Adams Lehmann became politically engaged because she was forced to encounter need arising from economic, social, medical and societal  constraints on a daily basis in her practice as a doctor. Women had it the worst because their necessities were the greatest: "a woman rarely was freely allowed to fulfill herself over the course of her sexually active life consumed by pregnancy, breastfeeding, and the care of her young children.  She also wants to take part in the raising of her growing children. This is not possible if her time and energy is perpetually consumed by the birth of yet more children. And she demands in addition to the task of the birthing and raising of children to work and enjoy other tasks in life, as a human being among other human beings."

The female author provided education and advice to women in a two-volume book dedicated to almost all aspects of daily life. She encouraged her readers to wear sensible clothing (minus corsett and floor length skirt), provided information on the latest methods of child rearing, education, housewivery and clarification on human anatomy and health care. This was important because ignorance was great and the perfect breeding ground for dangerous nonsense: "Admirers, fanatics, and hypocrites demand abstinence for reasons that we can here dispense with. Rational people will not yield to such advice. They know that nature is a force that will not be overthrown by theories, just as a mountain will not be moved by a swarm of mosquitos. The sex drive submits least of all to the coercion of any academic or religious regulation. No religion and no philosophy and not even dire need succeeds in its suppression. And do we imagine we might be more clever than Nature? Should we partake in such delusion, Nature's revenge will soon teach us how little we have understood her. If we succeed in robbing sex of its rights, we will soon have endangered our happiness and peace."