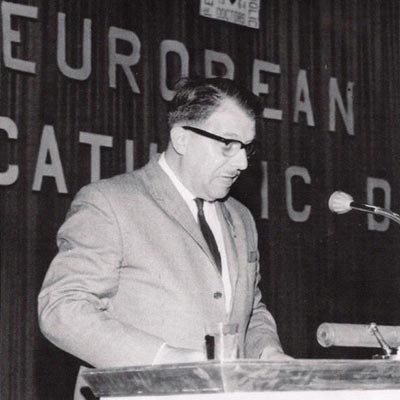 Ludwig Haberlandt, Gregory Pincus, John Rock, Carl Djerassi and many others– just like with other pioneering innovations, so too in the case of the contraceptive pill, several scientists were involved in its development – and they then announced their contribution in different ways – some more demonstrative, some less. One of the quiet, but nevertheless very important ones, was the gynaecologist Ferdinand Peeters[1](1918–1998), back then head of the obstetrics department of the hospital in Turnhout, a small town in northern Belgium.

It is him that we have to thank for the first ever pill in Germany, Anovlar: he investigated, assessed and developed the dosage of a Schering research preparation (consisting of norethisterone acetate and ethinylestradiol) that was originally intended to be used to treat menstrual complaints. However, Peeters saw in it an apt tool for preventing pregnancy, and was able to obtain approval from the company for his series of experiments. He chose patients for his studies for whom a further pregnancy would have been life-threatening, or who would be running a risk by bringing a child into the world, for example due to Rhesus incompatibility. His tests resulted in him recommending 3 to 4 mg of norethisterone acetate plus “at least” 0.05 mg of ethinylestradiol as the most appropriate combination of hormones.

After his results were reviewed and confirmed by large-scale studies on 14,038 monthly cycles of 2433 women in Germany, Australia, Japan and the USA, Anovlar was launched across the world: in February 1961 in Australia, in Germany and Switzerland in that same year, and in 1962 in Austria. France, Spain, Belgium and Italy followed suit.

In contrast to Pincus’s Enovid, Anovlar contained around 2/3 less hormone and used a different hormone combination: it was just as effective, but had considerably fewer side effects. Indeed, Enovid had only been approved by the American approvals authority, the FDA, for two years before scientific studies were able to demonstrate its long-term effects. For around half of Enovid patients suffered from irregular periods: many complained of severe weight gain, or swelling of the hands, feet and face, some developed jaundice, and two women even underwent early menopause. Enovid’s original area of application was menstrual disorders, but the product was in fact used as a means of contraception. The drawback of Pincus’s pill lay in the oestrogen used. The significance of this female sex hormone for the course of the female cycle was not yet known to scientists.

Out of fear of losing his position of employment due to the influence of the Christliche Volkspartei (Christian People’s Party), Peeters ended his research into hormones: due to the Catholic Church’s ban against the pill (1968), he faced threats in this regard. Although Catholic himself, he did not support the position of the Catholic Church, though, on the other hand, he was shocked by his contribution to the sexual revolution of the 1970s, which followed the development of reliable means of contraception. But also in very Catholic oriented Belgium, Peeters’ research and publications on this subject were unwelcome: up until 1973, publications on the topic of contraception ran the riskof violating Belgian legislation, which regarded them as obscene.