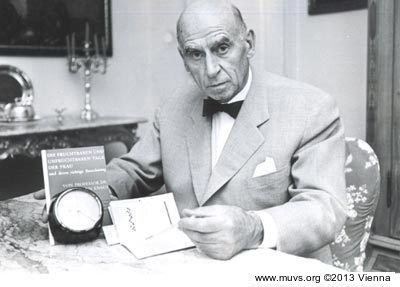 By the end of the 1920’s, with an understanding of the fertile and infertile days in the female cycle, the Austrian gynaecologist Hermann Knaus had helped women, couples, and doctors all over the world to better understand fertility. He revolutionized family planning.

o the male sperm's ability to fertilize; and

o the standard time period between ovulation and subsequent menstruation.

Knaus' observation that the female egg is capable of fertilization for only a few hours was accepted immediately. He wrote that his colleagues in the scientific community accepted his theory without requiring any further evidence.

However, his report that male sperm could fertilize for no longer than 5 days was adamantly rejected by the same scientific community and required ten years of further discussion and evidence. We can only speculate as to why the information on the sperm's "weakness" led to such reactions. Perhaps the male-dominated medical field at the time was emotionally touchy.

Knaus' third finding was a standard time period between ovulation and subsequent menstruation, which allowed for the first time a more or less accurate calculation of the fertile and infertile days. Prior to his research, there were widely divergent opinions. Some scientists maintained, for example, that women were fertile every single day.

Since Knaus' theory changed ethical and ideological positions, it took decades for it to achieve wide approval. Furthermore, Knaus' personality was polarizing, as clearly shown by this 1943 quote from his Berlin collegue Georg August Wagner: "He is brilliant as shown by both his scientific achievements and surgical results, which no other gynaecological surgeon was able to obtain... He enjoys international standing. But in one question, namely the only possible time period for conception, he is obstinate and has antagonized a great number of people through his crude rejection of every divergent view.”

Who was Herman Knaus? Born in 1892 into a well-off middle-class family of tradesmen in the Austrian district of Carinthia, he was a lifelong avid mountaineer, skier, and rider. His studies of medicine in Graz and Innsbruck were interrupted by WW1. Knaus enjoyed his professor's support, and in 1924 he used a Rockefeller research grant for a term with Professor A.J. Clark in London where he was introduced to experimental work with animal uterine muscles. Back at the Universitäts-Frauenklinik Graz, on January 31, 1927, Knaus made an important discovery: "On this day, I saw for the first time an unknown function of the yellow body in a pregnant rabbit's uterus: elimination of the muscle's sensitivity to pituitrine in order to immobilize the muscle and allow the undisturbed development of the egg...“ This reaction can be observed in the rabbit exactly 22 hours after ovulation.

In May 1928, at the Universitäts-Frauenklinik Berlin, Knaus observed under X-ray the forceful movements of the human uterus, while at other times those same muscles were flabby and inactive. Encouraged by these observations, he began (at Graz University) to graphically log human uterus movements. He learned that the same relaxing and flagging effects from the yellow body towards the muscle could be observed in the human uterus. This effect starts approximately 12 days prior to menstruation.

To determine the exact date of ovulation, Knaus asked his patients for notes on their menstruation. He learned that there are exactly 48 hours between the start of the yellow body’s activities and ovulation. From there he could calculate 14 days between ovulation and next menstruation due to the regularity of the yellow body’s cycle of growth and then decline once the egg burst.

In 1929, Knaus presented his new findings at a gynaecologists’ conference in Leipzig. In 1934, he published his menstruation diary and recommended it to every woman to help her understand her own cycle.

As early as 1923, the Japanese gynaecologist Prof. Kyusaku Ogino (1882-1975) had published his method for calculation in the „Hokuetsu Medical Journal“. But at the time, Japanese publications were not known in English or German-speaking science communities. Since Ogino’s and Knaus’ methods were very similar and were published nearly at the same time, they became known as their conjoint discovery.

The Knaus-Ogino-Schema was not only opposed because of scientific conviction. With the advent of national socialism, contraception quickly became an unpopular topic, later even a forbidden one. It took some time to realize that Knaus’ theory not only helped to pinpoint one’s infertile days, but also the fertile days. The following quote is from 1942: „Only now we have started to use Knaus’ theory of relatively infertile days since we saw that it also helps us to calculate the period of fertility. Today it seems prudent to make his theory widely known, since more than a few marriages thank him for their children.“

Hermann Knaus was not as widely honoured in Austria as he deserved, but he still enjoyed an international reputation. He was frequently invited for lectures and lavishly praised. As a pious Catholic, his most precious honour was the approval of his method by Pope Pius XII, as the sole contraception method tolerated by the church. This occurred in 1951 during a lecture for the Association of Catholic Italian Midwifes.

The calculation of fertile and infertile days ("counting days") became popular quickly since it gave couples great relief. It only took a backseat with the introduction of the Pill and other safe contraceptive methods. However, even today it is used by cycle computers for contraception and for couples wanting a child ("Babycomputer" and "Ladycomputer").

Due to the Vatican’s approval, the Knaus-Ogino method became commonly known as "Catholics' roulette" or "Roman roulette," since its safe use is subject to two important conditions. First, the woman’s cycle must be very regular without shifts due to stress, travelling, and other influences. Secondly, human sexual needs must be controllable in order to confine unprotected intercourse only to the relatively few "safe" days.

Knaus also spoke out on the Pill but rejected it strongly - on medical as well as moral grounds. His former assistant Heinz Braitenberg-Zenoberg wrote: „While more and more gynaecologists have prescribed the Pill over the last years, and many respectable and an even greater number of less respectable papers described and praised it, Knaus was one of its first opponents. The recent Pope asked Knaus for his expert opinion ... and there is no doubt that Knaus was a leader in rejecting it.“

Hermann Knaus died at the age of 78 in Graz. On his deathbed, he was visited by the Apostolic Nuntius in Austria who presented him with the Pope’s blessings. He was buried in his home town.