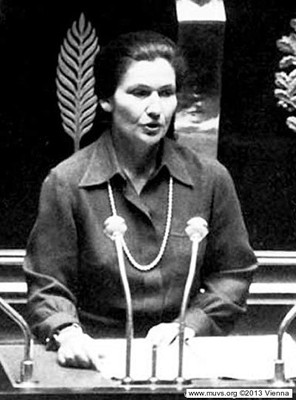 It was a particularly poisonous comment when this initiative to approve abortion from French health minister Simone Veil (1927-2017) was compared to the Holocaust: "Do you wish to send children to the gas chambers, Minister?"

For Madame Veil herself bore on her left forearm the number that had been tattooed onto her in Auschwitz. Her father, the architect André Jacob, her mother and her brother had all been killed in the Holocaust.

On 29th November 1974, Simone Veil's initiative achieved the necessary majority in a vote in the male-dominated French National Assembly (284 votes for the motion, and 189 against): "Abortion should stay an exception, the last resort for desperate situations. How, you may ask, can we tolerate it without its losing the character of an exception - without it seeming as though society encourages it? I will share a conviction of women, and I apologize for doing it in front of this assembly comprised almost exclusively of men: No woman resorts to abortion lightheartedly." With the passing of the so-called Loi Veil, France became the first predominantly Catholic country to decriminalise abortion. Shortly afterwards, Austria followed suit, where the legal limit (the point, up until which, one can legally have an abortion) came into force on 1st January, 1975.

Human rights were always a concern of Veil's. During her time in the Ministry of Justice, she brought about improvements to detention conditions for female prisoners, among whom were many Algerians who had fought to liberate their country from colonial rule. At the age of 46, she was appointed by Giscard d'Estaing to his cabinet, where she served as Health Minister. During this time, she also facilitated improved access to methods of contraception. She herself was no theorist, incidentally, but a married mother to three sons.

In 1979, she resigned from office and became President of the European Parliament in the first ever European elections. In terms of other important duties, Veil served, among others, as French Minister for Social Affairs, Health and Urban Affairs and, from 1998 to 2007, as a member of the French Constitutional Council; in 2008, she was then appointed member of the Académie Française. The list of her roles, initiatives and valuable contributions is merely endless. In national opinion polls, Veil is regarded as a moral role model. The New York Times called her “a politician who inspired France.”