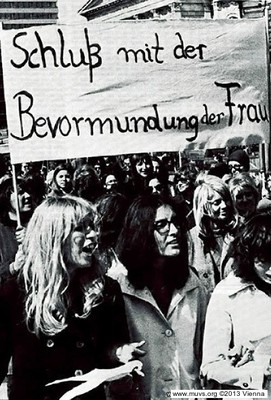 The ‘Action Committee for the Abolition of Paragraph 144’ was composed primarily of women who were committed Social Democrats. In 1975, the first edition of the feminist newspaper AUF (Aktion unabhängiger Frauen – Action by Independent Women) was published– and the debate about abortion was central. With slogans such as “My belly belongs to me!” and “Children or no children, only we decide”, women campaigned for the legislative basis for abortion without penalty and against all paternalism. Austria was part of an international trend. Between 1968 and 1970, starting in America, a new women’s movement was taking shape with two key demands: women’s right to decide for themselves about their bodies and legalisation of abortion. In France in 1971 prominent women, including Simone de Beauvoir for example, signed the 'Manifesto of the 343', in which they admitted to having had illegal abortions. Later that year the journalist and women’s rights activist Alice Schwarzer repeated the protest action with prominent German women in the News Magazine ‘Stern’. In many western European States there were demonstrations against prosecution for abortions. In the early 1980s, feminists in Germany set up the first women’s health centres.