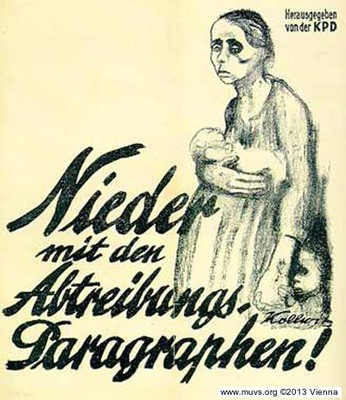 The play is set in the Weimar Republic, shortly before the world economic crisis. Hete and Paul are expecting a baby; both lose their jobs, and Hete decides to get an abortion. The doctor she goes to see only reads her paragraph 218 of the Criminal Code, under which such interventions are banned. In despair, Hete resorts to self-help… Performed in the Berlin Lessing Theatre by a group of young actors, the play ‘Cyankali’, became one of the most controversial pieces of theatre of the 1920s.

The playwright Friedrich Wolf was himself a doctor and so knew from experience the problem of the abortion paragraph. He was also however already an oft-performed dramatist, having first become noticed for his expressionist plays after the First World War. In 1928 Friedrich Wolf joined the Communist Party and published a volume of essays entitled ‘Art as a Weapon’. From then on he wrote plays that campaigned for a political message, of which ‘Cyankali’ was the very first. It led to his arrest – and subsequently caused a sensation from New York to Tokyo, from Moscow to Paris.

The unemployment crisis: a global phenomenon / Because they go on strike at the drop of a hat. / Rubbish! We’re locked out. / It’s six of one and half a dozen of the other. It always comes down to the paycheck.

In February 1929 there were more than three million unemployed in Germany. It was the time of the global economic crisis. The housing shortage was acute. A working family of four would generally have only one and a half rooms at its disposal, so this also fuelled the campaign for contraception. The then 40-year-old doctor Friedrich Wolf campaigned against the abortion paragraph (§ 218) not only in his role as doctor, but also as a playwright. Since 1927, left-wing – generally unemployed – actors had formed collectives, hoping to use theatre to influence political life. One of many such new collectives was the ‘Group of Young Actors’, who performed their plays at various venues. The first performance of the new play by Friedrich Wolf was rehearsed. The male lead, the stoker Paul, was to be played by the actor Gerhard Bienert:

'Cyankali', as the play was to be called…. “We didn’t have time to spend ten months rehearsing a play the way Brecht did. We performed it straight off, and the roles suited us down to the ground, no question about it .  [Gerhard Bienert]

Friedrich Wolf’s 'Cyankali' tells of Paul, a stoker, who breaks into the works’ canteen during the strikes in search of food for the women and children of the locked-out workers. His girlfriend Hete had just lost her job. When she finds out that she’s pregnant, Paul is on the run from the police. In despair, Hete goes to see a doctor who refers her to the abortion paragraph, and so she eventually ends up going to an ‘angel maker’, a backstreet abortionist…

On 6 September 1929, some 80 years ago, in the Lessing theatre in Berlin, 'Cyankali' was performed for the first time, and became a scandal and a success. “Cyankali is not poetry, but its primitive means are fitting here”, wrote the critic Herbert Jhering after that first performance. And Erich Kästner wrote for the newspaper Neue Leipziger Zeitung: “In a city with more than thirty national, municipal and private theatres, a group of out-of-work young actors has captured the spoilt, bored public”. In January 1930, after more than 100 performances, the ‘Group of Young Actors’ took ‘Cyankali’ on tour to all the major German cities, and then to Switzerland. Everywhere they performed, the play provoked bitter political debate, as the actor Gerhard Bienert recalls:

“So the play starts. Hete, I think, who was played by Rabasch, says to me: “Hey, Paul, I’m late.” To which there immediately starts up a mad whistling from the stalls: You pigs! Devils! And so on and so on… Stop! Stop!” [Gerhard Bienert]

In February 1931 Friedrich Wolf was arrested for having contravened the Abortion Paragraph (§ 218). However, the authorities had not reckoned with the storm of outrage his arrest provoked. The big names of the time, including the poet Bertolt Brecht and the publicist Carl von Ossietzky, supported the many protests, and Wolf was eventually released under caution on account of the huge public pressure. Friedrich Wolf’s fight was that of a socialist dramatist during the fall of the Weimar Republic; once the Nazis came to power this battle came to an end. As a communist and a Jew, the doctor and dramatist eventually felt forced to emigrate. After the end of the Second World War, Wolf lived as a freelance writer in East Berlin. He died in 1953 at the age of 64. Today his once controversial, disturbing plays have been all but forgotten.

You can read extracts from the play 'Cyankali' (in German) by going to our homepage and following the links to ‘literary quotes’.