“An Enormous Wrong Had Been Wrought against the World” 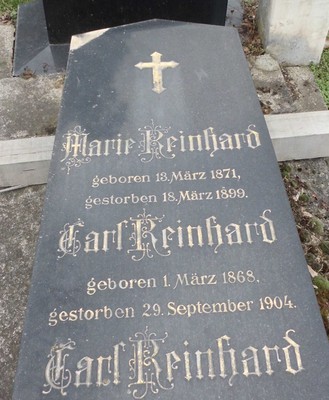 On Monday, 20 March 1899, a woman from a middle-class Viennese family, Maria Reinhard (born in 1871), was buried at the city’s Central Cemetery. This happened two days after her death – officially of complications from appendicitis. “I refuse to believe this!” stated Dr. Rolf-Peter Lacher, a German historian and scholar of German language and literature, and began to research the matter.

Maria Reinhard was one of the many girlfriends of Austrian writer and dramatist Arthur Schnitzler (1862–1931). Their relationship began in 1894 after Reinhard, a young voice teacher, visited the ear, nose and throat specialist because of problems with her voice. “She wasn’t the sort of woman one could have at a moment’s notice,” was how Schnitzler’s biographer, Renate Wagner, described the young woman in her 1981 book, a definitive work on the subject. “Really, the only way to ‘get’ someone like Reinhard was to marry her.” Still, Schnitzler managed to seduce her, and they were lovers for four years. She became pregnant while waiting and hoping that he would marry her.

Marburg’s Literaturarchiv has 230 of her letters to him, and numerous entries in his diaries contain mentions of their relationship and his reactions, emotions, anxieties, desires and excuses. In 1897, Reinhard bore a stillborn son, and “more causes for worry”, according to Schnitzler’s diary, followed in February 1899: Marie was pregnant again and upset because he was “putting things off” in the matter of marriage. On 13, 14 and 15 March they were still a couple; on 16 she was sick and on 17 “extremely sick”, when a gynaecologist and Schnitzler’s brother, himself a specialist for appendectomies, paid her a visit. She wasn’t taken to a nearby hospital and had died by the following day.

Lacher assumed that the cause of death wasn’t appendicitis. “Everything suggests a failed abortion.” In his book,[1]which appeared this year, he recounts the evidence: Reinhard wasn’t taken to hospital, which would have been normal in case of appendicitis, and died at home instead. Nothing more could have been done for her at hospital, but the true cause would have come to light, resulting in a criminal charge. The doctor listed peritonitis on the death certificate, and the true cause of death – an abortion – went unmentioned. This spared the family ‘shame’.

We will publish Rolf-Peter Lacher’s essay in honour of the anniversary of Maria Reinhard’s death, 18 March 2014.

From an e-mail exchange with the Burgtheater: “You will put on Schnitzler’s ‘Professor Bernhardi’. Are there no plans to commemorate Maria Reinhard, who died 150 years ago on 18 March? She was a model woman, and her death inspired the play’s plot. – Answer: “We would have a great deal of work to do if we were to deal with the muses of all authors whose works we stage. – “I understand, but are you not aware of the fact that Schnitzler was indirectly responsible for a woman’s death which was identical to that of the woman who died from complications after an abortion?” – “What was Schnitzler supposedly responsible for? Maria Reinhard died of a ruptured appendix.”

I can’t help thinking of a group gathered around a grave, not that of a successful writer, but where his victim lies, one of his victims, the woman whose death he was responsible for. Isn’t it unjust that the memory of Schnitzler lives on because of his plays, while the woman whose life he manipulated until her death is forgotten? After all, the grave still exists and will continue to exist as long as Vienna’s Central Cemetery. The Reinhard family purchased it for Maria, the youngest, and a few years later buried her brother, Karl, next to her, then her father and lastly her sister.

In the play, no-one visits the dying girl, not even the man she loved. Evidently, no-one visits Maria Reinhard’s grave anymore. “Our family is plagued by misfortune”, said Maria’s sister to Schnitzler.

On 13 March 1899, the monument to the craftsmen, students and other citizens who were shot down while demanding freedom from the Habsburgs was visited by columns of workers. The ‘fallen from the 1848 revolutions’ were honoured the same as every year.

In his diary, Schnitzler mocked the young woman as one of the fallen from the 1848 revolutions after manipulating her life in such a way that she lost her virginity on 13 March 1895, her birthday. He wanted her to regard herself as one of the fallen revolutionaries for the rest of her life, as someone who was unable to escape him. Reinhard had attempted to break out of her restrictive family life by making her own choice of the man she wanted to start a family with. Her goal was to get married and start a family that would do justice to the honour and standing of the Reinhard family.

In December 1896, Reinhard was pregnant with Schnitzler’s child for the first time. He claimed that he would marry her, though not right away. Her parents had no choice but to accept the situation, and her sister exhorted Schnitzler persistently: why didn’t he marry Maria immediately, why didn’t he at least marry her in secret? All this was in vain. Few other women have been subjected to such humiliation during a pregnancy as Reinhard. She was told to stay away from Vienna so that Schnitzler would be able to decide freely. The child was to be handed over to foster parents, which would have meant nothing less than an early death. Schnitzler expected her to have her child in a dilapidated house in Mauer, then a village outside the city, and labour lasted for more than five days. The newborn was finally dead, and Maria just survived. Schnitzler only had to assume the funeral costs, and he even tried to convince the midwife to reduce her fee.

In his diary, Schnitzler complained of frequent anxiety. And there was a simple cure for that: either marrying Reinhard, which would turn the pregnancy into a happy event, or doing without sex. Well, that certainly wasn’t a viable alternative; after all, Schnitzler wanted to personally experience what he was writing about. In the past, the writer had occasionally patronized a prostitute, which didn’t involve the danger of a pregnancy, though disease was a possibility. Cultivating a long-term lover’s hopes to be married at some point was safer and healthier. In February 1899, Schnitzler had some new worries: Maria was pregnant again. What else could he have expected? A child, as he supposedly told Reinhard, just wouldn’t do at that time. He was too busy to get married, because his three one-act plays “Paracelsus”, “Die Gefährtin” and “The Green Cockatoo” were about to premiere at the Burgtheater.

Paracelsus is Schnitzler. Paracelsus-Schnitzler understands women. His love brings them from the darkness of the soul and into the light. Thanks to him, they dream their lives in a state of hypnosis before being abandoned to an unfamiliar reality.

In the second play, which premiered on 1 March 1899, Robert returns from the funeral of his wife, who died unexpectedly. He’s forced to admit that the couple had grown apart. Robert accepted the fact that his spouse was having an affair. He then finds out that the other man was engaged to be married, which made Robert’s wife a whore. But then Robert learns the entire truth: his wife was aware of the engagement, realising that love isn’t eternal. Life came easily to her, and she had never stopped loving Robert. Schnitzler set up his plot as follows: the real woman, the one whose life is easy, is aware of the finite nature of love.

In “The Green Cockatoo”, a woman’s love for her husband is demonstrated in that she repeatedly returns to him after her adventures and affairs, while he’s subjected to ridicule. The man refuses to abandon the illusion that he could successfully deal with woman’s impulsive, sexually-driven nature through the sanctity of marriage.

The idea of women created by Schnitzler releases him from any and all responsibility to them. He admits as much in his diary: he hates his lovers. This hatred gives him the freedom to turn a woman’s love into the material he requires for his works.