Transcriptions of Legal Proceedings from the Ministry of Justice’s Archive, Copenhagen, Denmark 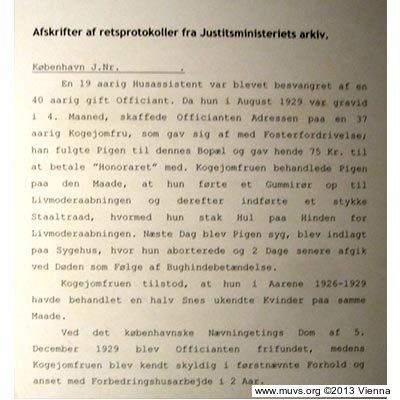 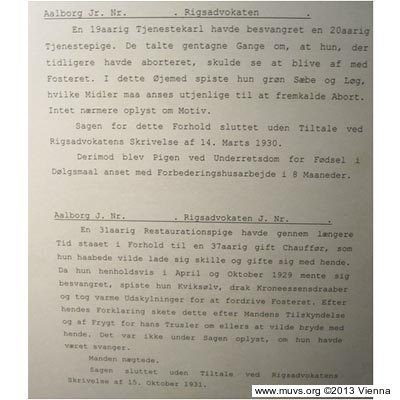 A 19-year-old domestic servant was impregnated by a 40-year-old non-commissioned officer who was married. When in her fourth month in April 1929, the man obtained the address of a 37-year-old cook who performed abortions. He and the girl went to the cook’s apartment, and he gave the 19-year-old 75 crowns to pay the cook’s fee. The cook treated the girl by inserting a rubber tube into the uterine opening and then pushing a length of wire through it, which punctured the membrane near the uterine opening. The next day, the girl fell ill and was taken to hospital, where a miscarriage ensued. Two days later, she died of peritonitis. The cook admitted to having treated in the same way six different women she was not acquainted with between 1926 and 1929. On 5 December 1929, according to the decision of the jury in Copenhagen, the non-commissioned officer was pronounced innocent, and the cook was found guilty in the case at hand and sentenced to two years’ labour in a house of correction.

A 19-year-old farmhand impregnated a 20-year-old maid. Several times, they discussed the fact that the girl, who had already had an abortion, should deal with the foetus herself, and so she ate green soap and onions. These substances must, however, be considered unsuitable for use in an abortion. No additional information was provided with regard to motive. As a result, the proceedings ended without charges being filed upon the order of the prosecutor dated 14 March 1930. Furthermore, the district court sentenced the girl to eight months in a house of correction for clandestine delivery of a child.

Aalborg, journal of the prosecutor general.

A 31-year-old restaurant employee had a relationship lasting several years with a 37-year-old chauffeur. She hoped that he would divorce his wife and marry her. When she assumed she was pregnant in April or October 1929, she ate mercury, drank Wunder-Kronenessenz [note: according to an encyclopaedia, Salmosens-Konversationslexikon, this is a mixture of extracts of aloe, saffron, rhubarb and other bitter constituents that has a laxative effect], and gave herself douches with warm water in order to abort the foetus. According to the woman, this was done after the man pressured her to do so, and as she feared he would leave her otherwise, which he threatened. During the proceedings, it was not ascertained whether she had been pregnant. The man claimed that this had not been the case. The proceedings ended without charges being filed upon the order of the prosecutor dated 15 October 1931.