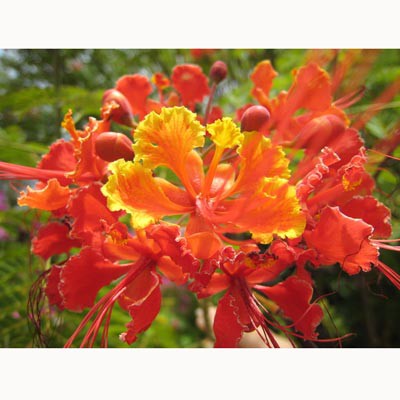 A ‘childbearing strike’ as a political weapon is much older than claimed on Wikipedia. The first instance wasn’t in 1913, when the German and French labour movement discussed employing it to call attention to their political and social demands.

Much earlier, in 1700, the artist and naturalist Maria Sibylla Merian (1647-1717) undertook a journey to the South American country of Suriname, where she marvelled at the beautiful Caesalpinia pulcherrima, also known as the Poinciana, Peacock Flower and Red Bird of Paradise. Merian wrote:

“Their seeds are employed for women in labour who are expected to continue working. The Indians, who are not treated well by their Dutch masters, use the seeds to abort their children, so that their children will not become slaves like they are. The black slaves from Guinea and Angola demanded to be well treated, threatening to refuse to have children. In fact, they sometimes take their own lives because they are treated so badly, and because they believe they will be born again, free and living in their own land. They told me this themselves.”

In the first half of the 18th century, primarily coffee, cacao, tobacco, sugar and indigo were cultivated in Suriname. The majority of the work performed at plantations was done by about 60,000 mostly ill-treated African slaves brought primarily from the modern states of Ghana, Benin, Angola and Togo.

When discussion of abolishing slavery began in Europe, procuring new labourers became increasingly difficult and expensive for planters. For this reason, many attempted to further exploit their female slaves, as ‘childbearing machines’. To terminate their pregnancies, these women used either the seeds of the Caesalpinia pulcherrima or an extract from the plant’s roots.

Large numbers of the pretty Caesalpinia pulcherrima were brought to Europe and from about 1660 grown in all important gardens, such as Paris’ Jardin du Roi and the Netherlands’ Hortus. But knowledge about its usefulness for terminating pregnancies failed to come with it. Even the famed Dutch doctor and botanist Hermann Boerhaave (1668-1738) considered the Caesalpinia pulcherrima beautiful but without practical use.