Lather from a Soap Solution 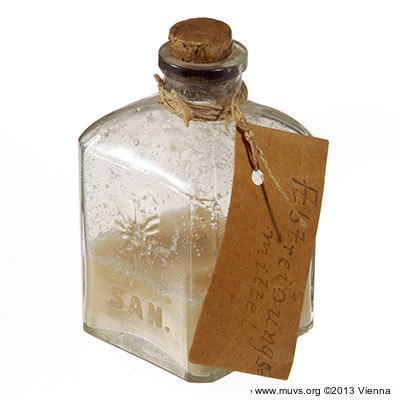 A few years ago a police museum loaned a bottle containing a yellowish liquid to the museum. What was it? The donor permitted taking of a sample. Which wasn’t necessary, as it turned out: a simple shake revealed all. The immediate formation of foam showed that this was soapy water, commonly used in the past for abortions.

And these tiny bubbles that revealed the liquid’s identity endangered the lives of a great many women! The air pressed into the bloodstream through forceful douches of the female inner organs with a hose or catheter blocked up the heart and vessels; medical literature is full of reports of women who died as a result. The case of a twenty-year-old turned out well in the end, as was reported in the gynaecological journal Zentralblatt für Gynäkologie in 1921:

In her third month of pregnancy, she “douched daily for one week ... for which purpose she used a rubber ball with a volume of approximately 150 cc, to which was attached a straight, rigid tube approximately 12 cm in length. Since this failed to have the desired effect, she repeated this action with the aid of her fiancé on the day of her admittance. This was done with somewhat more force, as she admitted. A solution of soapsuds was used.... The patient felt extreme pain, and bleeding began immediately. Soon thereafter she became short of breath and lost consciousness for an extended period, during which time the patient’s entire body took on a distinctly bluish tint.”

Luckily, the young woman received prompt treatment at a hospital and survived, and the pregnancy was ejected. It turned out that the tube had gone all the way through her cervical opening and into the bladder. On top of that, a ball syringe was used, which forced air into the opened vessels of her uterus and bladder. Fortunately, this air failed to reach the patient’s heart, which would have continued pumping though there was no blood. Instead, she had nothing more serious than shortness of breath, a fainting spell, and some circulatory problems. A large number of other women have died after such incidents.

Soap was frequently used as an abortifacient because it can dissolve delicate tissue, resulting in ejection of the foetus.